Flooding in the former ‘Brothers’ Field’ and the Marsh in Skibbereen.

FOR the third time in two weeks West Cork has been devastated by flooding.

It began in Rosscarbery in the early hours of Thursday, August 13th when 98.4mm of rainfall – a possible record for the coastal town – damaged property and ripped up roads.

On the same day, Storm Ellen put neighbouring Rathbarry, as well as properties at Chapel Street in Dunmanway, under water too.

Then last Wednesday, Skibbereen was subjected to a flash flood as 3ft of water flowed through homes and businesses at Bridge Street, after a storm drain at the area known as ‘The Cutting’ failed to cope with the run-off from a hill above.

But it was the third assault on West Cork, Storm Francis, that was probably the most devastating of all because on Monday of this week, no fewer than 50 homes and businesses in Bantry were flooded and roads literally erupted from the force of the water pressure. 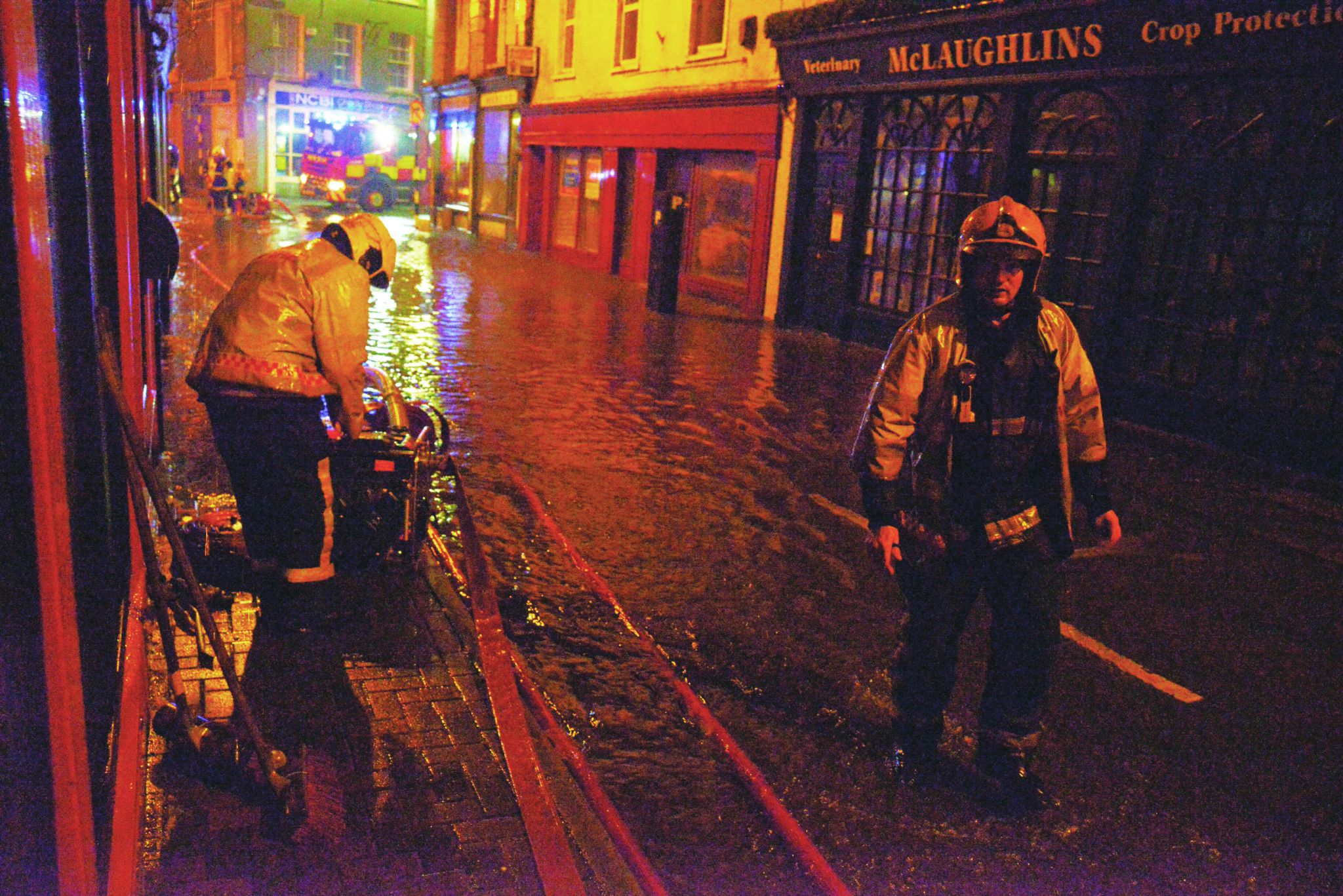 A beleaguered Bandon’s hopes of avoiding flooding – following the near completion of its flood defences – were dashed on the same night, as some of the town’s busiest shopping streets were awash with murky flood water.

Even Clonakilty – which, like Skibbereen and Bandon, is in the final phases of flood protection works – was affected when the nearby coastal village of Ring became flooded once more. Drimoleague, too, was impacted by surface water flooding. There was flooding also on the N22 at Macroom and Ballyvourney. A river burst its banks at Halfway House, Kilnamartyra and a landslide was reported on the Begley’s Forge road at Crossbarry.

The OPW’s €18m flood defences in Skibbereen town centre – which were designed to offer protection against the River Ilen and its tributaries – held, and the concrete channels filled up in spectacular fashion, but so too did the fields around the town as the already saturated catchment area expanded to look like lakes. 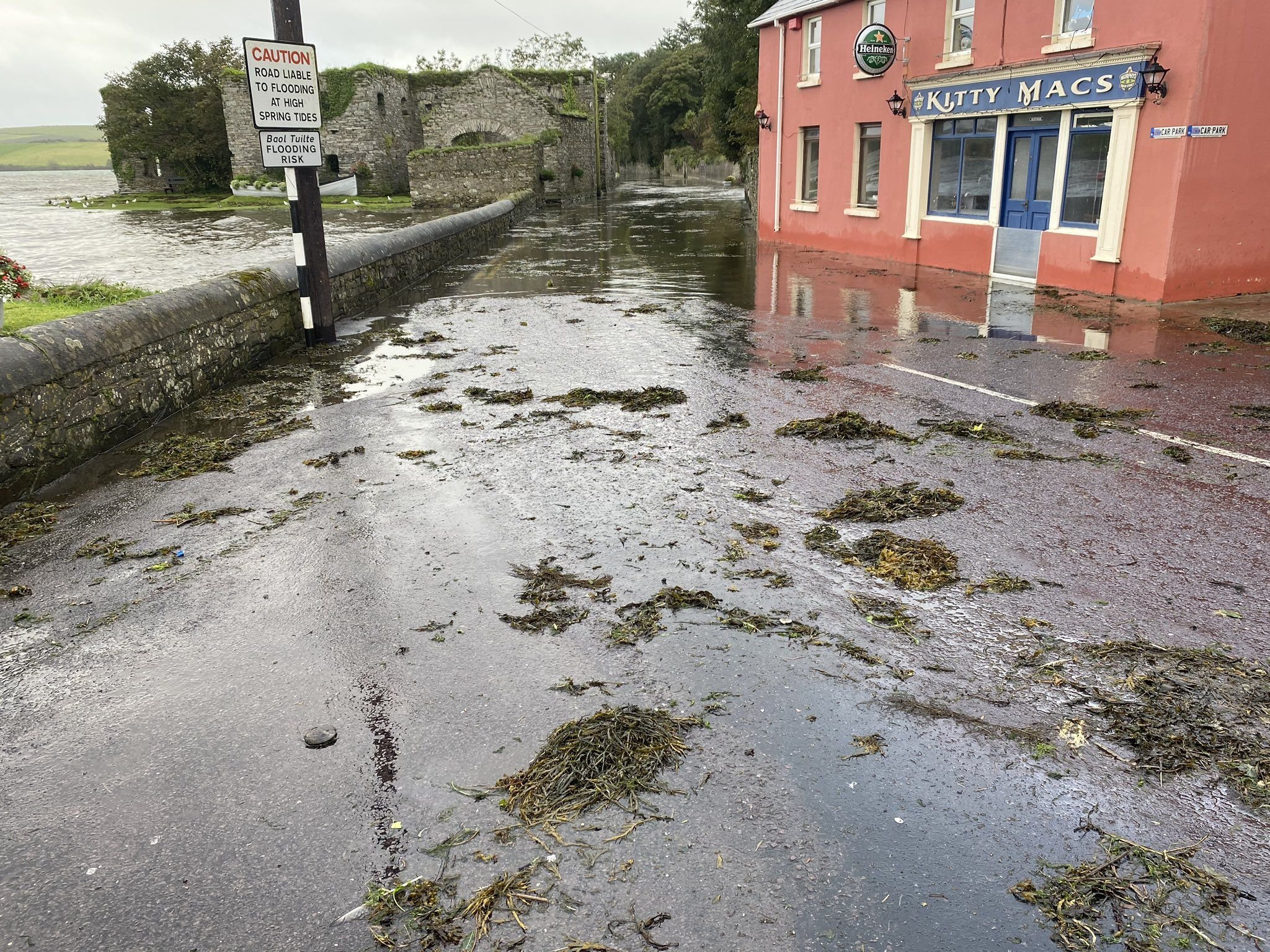 Water and debris outside Kitty Mac’s pub in Ring.

The extent of the damage to West Cork’s already substandard road network is still being calculated by Cork County Council. The Rosscarbery to Glandore road is just one area that remains closed to through traffic. There are countless by-roads throughout West Cork that have been ripped and rutted by the surface water.

Over the last two weeks, the Council workers have also had to clear fallen trees, and fears remain that more trees could fall because their roots have been destabilised.

For a time on Tuesday there were power outages in Clonakilty, Riverstick and Kinsale but all power had been restored by Wednesday morning.

When he visited Skibbereen last week, Taoiseach Michaél Martin said he would be liaising with the Office of Public Works and Cork County Council to oversee the completion of final flood relief measures. 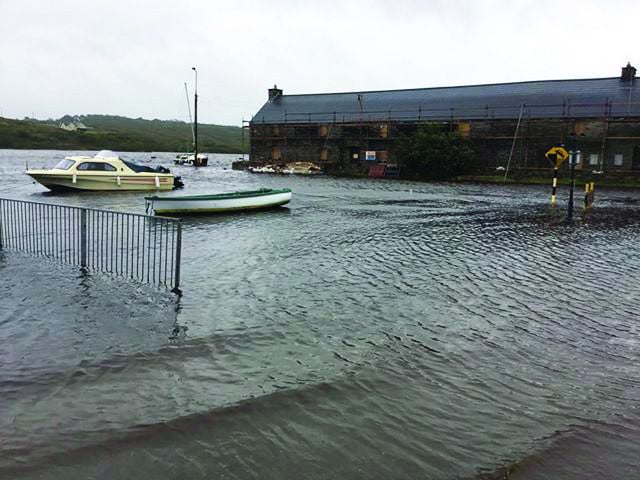 Hazardous conditions in Ballydehob where high water made it difficult to distinguish the shore and pier from deep water.

Meanwhile, businesses that are not covered by insurance will be able to apply for financial assistance from the Government by applying through the Red Cross.

Senator Tim Lombard said there is an additional ‘invisible’ cost to be included. ‘Our subterranean drains and culverts from Bandon to Dunmanway, and from Bantry to Skibbereen, did not work,’ he said. 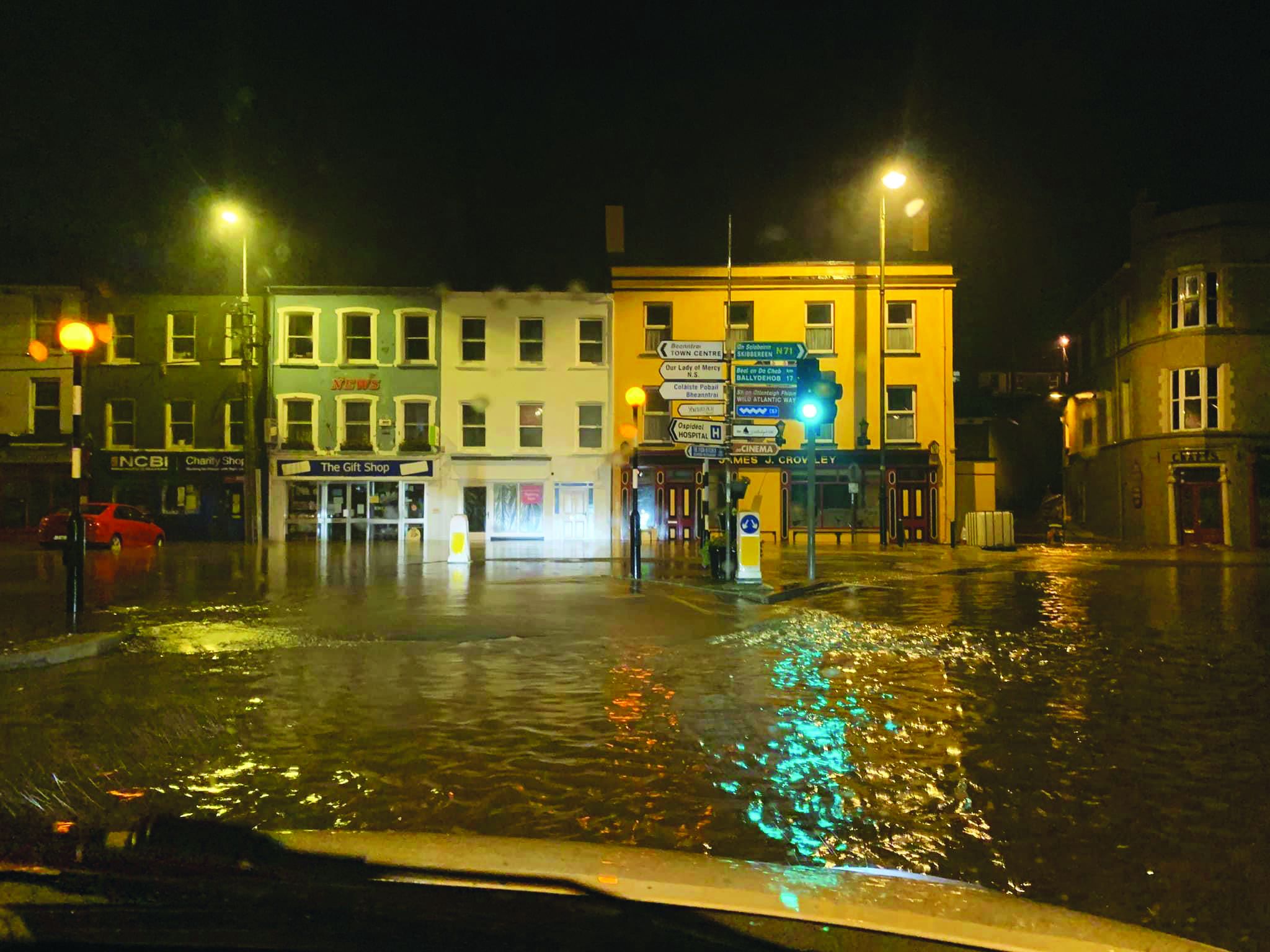 The scale of the problem was put into context by Cllr Danny Collins (Ind). He said an underground culvert at Bridge St in Bantry – measuring 6ft by 12ft in places – could not cope with the run-off from the catchment area and flooded New Street like it was a free-flowing river.

Cllr Collins has convened a special meeting of the West Cork Municipal District – which will take place at 11am at the Boy’s Club in Bantry on Monday, August 31st next – to discuss this and other urgent flood-related matters.