Patrick takes on Putin: IS&WFPO ceo Patrick Murphy, centre, with Castletownbere fishermen, from left: David Minihane, John D O’Sullivan, Greg Casey, Damien Turner and Ronan Sheehy, who are mounting a ‘peaceful protest’ against the Russian exercises which are taking place in their fishing grounds next week.

By Siobhán Cronin
and Jackie Keogh

WEST Cork trawler owners, who are refusing to halt their plans to fish near the location of planned Russian military training exercises next week, vow they will – like the Skibbereen Eagle – be ‘keeping their eye’ on Russia.

The fishers, who are planning a ‘peaceful protest’ of up to 60 boats, at the Porcupine Seabight, say that fish breeding could be ‘severely disrupted’ by the Russian exercises.

They are annoyed that the Russians are hosting military exercises just as the season for prawn fishing begins in the same area and are meeting the Russian ambassador this week to express their concerns.

‘It is our understanding that live fire exercises cannot take place if our vessels are engaged in fishing,’ said Patrick Murphy, chief executive of the Castletownbere-based Irish South & West Fish Producers Organisation (IS&WFPO).

The Russian embassy said such a protest by West Cork fishers would be ‘reckless’ and could put both sailors and fishermen ‘in harm’s way’ – words described by Tánaiste Leo Varadkar on Wednesday as ‘menacing’. Mr Varadkar told the trawler owners: ‘Please be careful’.

‘It’s like a sketch from Father Ted – but if you saw it on the television, you wouldn’t believe it,’ Patrick Murphy said. ‘There is 2bn tonnes of blue whiting there and Russian trawlers themselves will be fishing in the area – they’re also prawns there and our season is starting on February 1st – days before these exercises are due to take place. How would we react if the Russians were to come onto Irish land and do their missile testing in, for example, the Burren? The sea is our ‘farm’ and this should not be allowed.’

He said the Department of the Marine had not informed the organisation of the upcoming exercises and he wondered if the Irish navy would provide protection for Irish trawlers.

However, when contacted by The Southern Star, the Department of Defence refused to comment on the matter.

‘Our vessels are getting arrested for minor infringements but it’s okay not to tell us about these military exercises?’ Mr Murphy questioned, adding: ‘This is the Russians saying “look how close we have come to you” – this is intimidation of the highest order. We are the cheese and they are the mice.’ 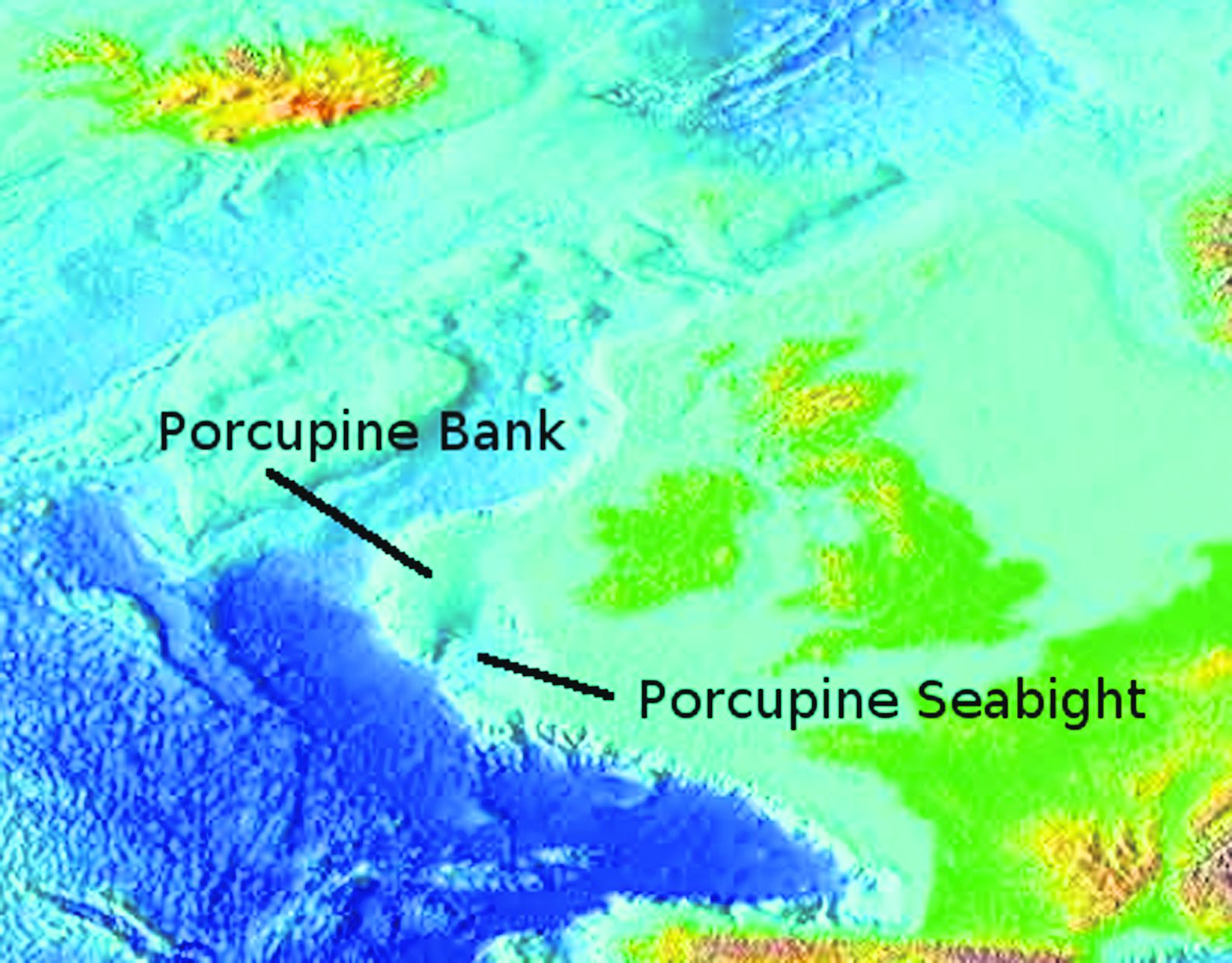 The prime fishing grounds are at Porcupine Seabight off the south west coast. (Photo: Wikipedia)

‘One of our men even said why don’t we give them some of the 60 boats, that our government wants to de-commission, for target practice. They will be no use to us anyway,’ Mr Murphy added.

John Nolan, chairman of the Castletownbere Fishermen’s Co-operative, noted that about 20 Castletownbere trawlers will be heading for the Porcupine Bank to fish for prawns on February 1st.

‘If the Russians are outside of 200 miles, or 240km, we might not like it, but there is nothing we can do about it,’ he added, ‘because that is international waters.’

‘If they are in our territorial waters we should be prepared to put a [navy] ship out, because it’s not allowed and would be a diplomatic incident.’

Pádraig Whooley of the Irish Whale and Dolphin Group (IWDG) said it was commonplace a few decades ago for deep-diving whales to wash up dead on beaches after Nato exercises.

If the Russians use acoustics as part of their warfare training, he said, ‘deep diving whales will die.’

Government TD and former whale watching guide Christopher O’Sullivan said this week the exercises could result in an ecological disaster for numerous  species of whale, dolphins and fish.

‘This is a well-known hotspot for deep diving sperm whales and pilot whales. It’s also known as one of the best areas in the north east Atlantic to see the largest animal that has ever lived, the blue whale, with high numbers of fin whales also reported there,’ he pointed out.

‘Any missile activity or artillery related activity would have dire consequences. In terms of fisheries, prawns, blue whiting and other species will also be threatened,’ Deputy O’Sullivan said.

The Green party in West Cork said the training must be opposed by the government.

‘We will most likely see an increase in strandings and beachings of whales and dolphins in the coming months,’ spokesperson Rory Jackson predicted.

‘Two years of living with the Covid pandemic and now I have to worry about Russian missiles landing in my front yard,’ was the response of former media executive Bob Miller whose house is on the Sheep’s Head Way.

Bob, a native of Wisconsin believes the military exercises will pass without incident, but he said, ‘I am also concerned about the way this is escalating between the west and Russia.’

The Skibbereen Eagle (now incorporated into The Southern Star) famously stated in 1898 that it was keeping its eye on the Tsar of Russia.

West Cork is still keeping its eye on Russia in 2022.