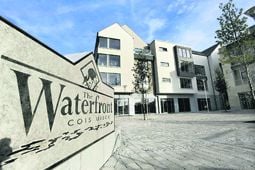 THE new owners of the Waterfront site in Clonakilty are in talks with the HSE for a primary care health centre in the town.

There are other major plans for the site, which sold for €2m at the end of last year.

Kieran Coughlan of Lyonshall Ltd, a development company based in Blackrock, Cork, is positive about the opportunities that the site offers.

‘We’re securing the site and cleaning it up and making it more presentable by washing it down. It has been idle for some time so it needs a little bit of work, and we’re being very pro-active about this project,’ he said.

‘This is a good thing for the town of Clonakilty and with over 30 years in the development business, this is going to be done properly and we will be proud of it,’ said Mr Coughlan, Lyonshall managing director.

It will be a four-to-five-year project from beginning to end, and redevelopment is expected to start early next year.

‘We have already applied to the HSE to set up a primary care health centre here, and hopefully we will have other end users like a doctor’s surgery and a pharmacy,’ he said.

He added that his company was also behind the building of the HSE primary care centre at Blackrock Hall on Skehard Road in Cork, as well as an Aldi store there.

There is already planning permission for an Aldi store at the Waterfront site in Clonakilty, he added. ‘But we may move it closer to the Inchydoney Road, and we are in negotiations with some other end users including a large retailer, who isn’t in the food sector.’

He added that once Aldi arrive, it will hopefully draw people to the site. ‘It should be up and running in a year and a half,’ he told The Southern Star.

The three-storey complex includes 33,840sq ft of commercial space and 150 residential and mixed units, as well as the recognisable ‘whale tail’ sculpture and water feature. Part of the building was previously occupied by Gaelscoil Chloch Na gCoillte.

The building went on the market this time last year with a guide price of €1.2m, which saw several bidders eyeing up the site.