Maintenance by contractors for Irish Water in Meadow's Estate in Belgooly 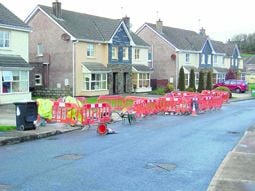 Maintenance by contractors for Irish Water have returned to move some meters in Meadow’s Estate in Belgooly.

DESPITE installing water meters a little over two months ago, contractors for Irish Water have returned to an estate in Belgooly to carryout out essential maintenance on the original ground works, surrounding at least twenty water meters.

It’s believed the works involved relocating a number of meters to a more suitable location.

Certainly the residents of the Meadow’s Estate, who did not object to the original instalation, were again left with a major inconvenience during the process, with residents unable to park their cars in their driveways, pedestrians unable to access footpaths and traffic management issues caused by residents forced to park their vehicles in alternative locations in the estate.

A spokesperson for Irish Water said: ‘Irish Water has a strict auditing programme of all works carried out as part of the national metering programme. A team of field inspectors carry out frequent audits of the contractor’s reinstatement.

‘All reinstatement works have to comply with the reinstatement specifications as outlined in the Department of Environment, Community and Local Government guidelines. If audits show that the reinstatement is not up to this standard, then the contractor must repair at his own cost. Members of the public can also report any issues during the works directly to Irish Water by contacting 1890 278 278.’

Sinn Fein Cllr Rachel McCarthy said she had received a number of similar complaints from the residents in The Belfry Heights and Meadow Land Estates in Bandon.

‘The whole process in establishing Irish Water has been a rushed job and the consequences are now becoming even more apparent,’ she said.