A delighted Stella McGrath reuinited with her pony Gismo on Wednesday. 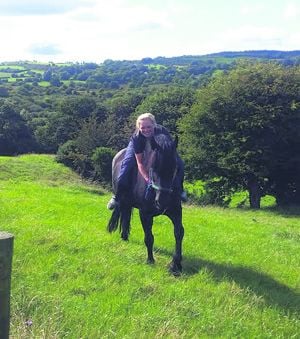 A delighted Stella McGrath reuinited with her pony Gismo on Wednesday.

THE power of social media may have had a role to play in the safe return of Gismo, who was stolen from a field in Poulanargid last week.

Innishannon’s Stella McGrath and her friends mounted an intense social media campaign to highlight the theft of her cobb pony.

According to Stella, Gismo may have become ‘too hot to handle’ for whoever stole him and they had no chance of selling him, as he would have been recognised straight away.

‘We were absolutely thrilled to get a call on Wednesday afternoon from a neighbour who said that they found him in a field near where he was last seen.

‘The thing is three different people had checked that field already and there was no sign of him,’ she said. ‘The main thing he is fine, no scratches or a bit.’

Gismo was being kept in a field in Poulanargid and he was stolen sometime last week while his field mate was left behind.

The 15.1hh cobb pony has a distinctive white star on his forehead and a white sock on his right hind leg and he was also microchipped and passported.

‘I’ve had Gismo seven years since July 21 and he is my first pony. so obviously I. along with my family. was devastated when he was gone. It’s unbelievable that he has shown up and I’d like to thank everyone for helping me in looking out for him.’

Anyone with any information on Gismo’s theft is asked to contact Macroom Garda Station at 026 20590.