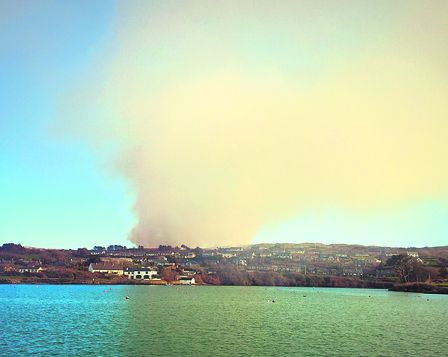 GARDAI have warned that illegal gorse fires can result in large fines and imprisonment under Wildlife Act.

Crews from Bantry, Schull, Skibbereen, Dunmanway and Castletownbere spent a recent weekend tackling gorse fires that were illegally lit. The Wildlife Act prohibits the burning of gorse between March 1st and August 31st.

This week the Irish Wildlife Trust condemned the practice and called on the Minister for Agriculture, Simon Coveney, to enforce the rule that illegal burning should threaten a land owner’s single farm payment.

‘This illegal practice is resulting in the massive degradation of upland habitats and is driving species to extinction,’ said the Trust. It said the rule was ‘not routinely enforced’.

Minister of State with responsibility for forestry, Mr Tom Hayes TD, recently alerted forest owners, farmers, and members of the public that the continuous dry weather presented a risk of wildfires.

Despite the warning, the fire fighting brigades in West Cork have been hard pressed recently to deal with the volume of calls.

Crews from Skibbereen, with the assistance of some local people, spent four hours tackling a gorse fire at Trafraska in Baltimore one recent Saturday.

With the wind carrying huge plumes of smoke in the direct of the popular tourist village the fire initially seemed to pose a bigger threat – with one home seeming to be at risk for a time – but the situation was dealt with quickly and effectively and the fire was brought under control.

Meanwhile, Bantry station officer, Ian Vickery, confirmed that two crews from the station were engaged in fighting a gorse fire on the Sheep’s Head Peninsula two weeks ago, followed by a house fire in Durrus, and a subsequent hill fire at Tooreen, Kealkil on Friday night.

The first of four calls on a Saturday came at 3pm when the fire fighters were tasked with fighting another gorse fire that was endangering a forest near Ballingeary.

They also dealt with a gorse fire at Coomkeen in Durrus before they were diverted to an automatic fire alarm at Colàiste Phobal Bheanntrai but that proved to be just a fault with the alarm. And that evening, the Bantry fire fighters were called to assist Dunmanway Fire Brigade in tackling a gorse fire at Coolmountain.

Dunmanway fire crews also had a busy next day dealing with a forest fire at Derrynacaheragh and they enlisted the help of Bantry in bringing that under control before Dunmanway was called to come to the assistance of the Macroom Fire Brigade who had to deal with a serious gorse fire at Cúl Aodha near Ballyvourney.

The two final shout outs came that Sunday night when Bantry dealt with another gorse fire at Ardnagashel near Glengarriff, and another at Shandrum in Bantry. Castletownbere crews, meanwhile, were engaged in fire fighting in Ardgroom on both Saturday and Sunday, which meant that every fire brigade was committed to gorse fires at one stage.

‘We were all charged with dealing with gorse fires, which are totally preventable,’ said Mr Vickery, who pointed out that if there happened to be a house fire, or a traffic accident, their response time in getting to the scene would have been hampered by the fact that they were fighting fires on mountain terrain.

The station officer echoed the minister’s concerns about the number of major wildfires that have damaged or destroyed property, including farmland and forests, and even a tiny island off Glengarriff in 2014.

He warned that these events endanger people’s homes, place enormous strain on the resources of the emergency services and put the lives of rural dwellers and emergency service personnel at considerable risk.

It is believed that many farmers engage in the practice of burning ‘scrub’ in a bid to reduce penalties for marginal land under the Single Farm Payment scheme.

After every extended dry period, there is the risk of wildfire because there is so much flammable vegetation in the form of grasses, gorse and heather in close proximity to forests and property.

The minister has called on landowners, rural dwellers and other land users to maintain a high degree of vigilance regarding fire over the coming months. He said suspicious activity should be reported to the Gardai and uncontrolled or unattended fires should be reported immediately to the fire and emergency services.

Meanwhile, the Cork Wildfire Co-operative Group – a group that comprises representatives of the IFA, An Garda Siochana, Coillte, Teagasc, the National Parks and Wildlife Service, Cork County Council Fire Service, Cork County Council and Community Alert, met recently in Macroom and highlighted the fact that illegal burning can result in large fines and imprisonment under Section 40 of Wildlife Act 1976.

The group acknowledged that the burning of scrub is an effective and necessary tool for landowners and farmers in proper land management but the group is keen to promote safe burning practices and to prevent illegal burning during the prohibited burning season.

‘Controlled burning of land or vegetation between September 1st and February 28th requires expert skill and a rigorous fire plan needs to be in place,’ advised crime prevention officer Sgt Ian O’Callaghan. A controlled burning demonstration was held in Kealkil before Christmas for the benefit of land owners and the feedback was very positive, he told the Southern Star.

‘Due to its success it was suggested that a 2 phase live burning demonstration would take place in October 2015 and February 2016 in order to demonstrate how to burn off scrub safely,’ he added.

‘Landowners have a responsibility to limit a build-up of incendiary scrub by careful management, and the need for co-operation with friends and neighbours. Do not burn if the weather is unsuitable for controlled burning. Obtain weather forecasts as close to the time of burning as possible,’ he suggested.

He also made the following observations: ‘Do not burn when the moss and plant litter on the ground surface has completely dried out. Do not burn if the wind is too strong for the fuel types involved. Do not burn if the flames are likely to be longer than 3 metres or about 10 feet. Do not allow the width of the burn to exceed 50 metres. Do not burn unless you know how and where the fire will be extinguished. Do not burn uphill on steep slopes. Do not burn in the following areas: hedgerows, woodland, thin eroding soils, summits and ridges. Ensure that workers are supervised, understand the burn plan and emergency procedures, and have access to clean drinking water so that they do not suffer from heat exhaustion.’

Sgt O’Callaghan pointed out that Department of Agriculture website under ‘Forestry’ has a very informative and useful Prescriber Burning Code of Practice booklet available for downloading, which is a must-read document for landowners engaged in burning to manage land.