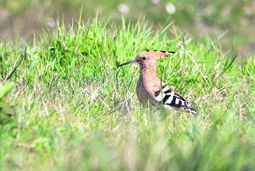 THE recent warm weather has resulted in a beautiful continental bird being sighted throughout West Cork.

The hoopoe bird – which normally migrates to the continent this time of year – has been spotted and photographed in several locations this week along the south coast, but especially on the stretch between Timoleague and Skibbereen.

The birds have very distinctive plumage – comprising a zebra-type black and white wing, over a rusty orange chest, and a similarly stripey colouring on the tip of their head crest, making them look quite exotic among native Irish birds.

According to Nicholas Mitchell of Birdwatch Ireland, who photographed the bird last weekend near Timoleague, there may be as many as 50 of these birds now located along the Irish coast.

The bird would normally make its home in France or Spain at this time of year, but last year’s unusually high pressure for April, combined with a strong northerly wind, may have meant the birds were blown too far north.

‘They would normally be found in North Africa or on continental Europe,’ Nicholas explained, ‘and they head further north in spring to breeding grounds.’

But the recent warm weather meant many ‘overshot’ their destinations last week, and ending up migrating to the southern Irish coast.

‘Every year we have sightings of up to about 12 of these birds – no more. But this year we are looking at about 50 birds,’ he said.

He added that the last time this happened was in 1965, when about 65 hoopoes were found here. The birds are about the size of a blackbird, with a much wider wing span.

‘They like sandy, dusty surfaces, with short grass, so they can feed on invertebrates in the ground,’ explained Nicholas, who photographed one on short grass alongside a driveway. ‘Some may spend the summer here but, if they do, they will certainly fly south in the autumn to spend the winter in Africa,’ he said.

One of the best ways to catch a sighting of the bird would be to accompany BirdWatch members on their Spring Migration Outings, taking place throughout April, suggested Nicholas. Email [email protected]

They are named after the distinctive sound they make while calling.