A local artist has recorded conversations with residents from Clonakilty’s direct provision centre as they rambled the lands of West Cork. The unique project gives voices to those who might otherwise have remained unheard

HOW do you define your identity? What does it mean to be native or non-native? What is your connection to the landscape around you?

These are the questions one West Cork artist has been exploring in his recording project Land Walks Land Talks Land Marks.

William Bock grew up in Union Hall, attending primary school there before his family moved to the UK. While William always felt close to West Cork, in the past number of years he has spent more time here and now divides his time between Skibbereen and London.

‘My parents are from Sweden and the UK, but I grew up in Ireland. I see myself as both Irish and European. This identity strongly informs my work,’ says William.

William speaks a lot about the fuchsia plant which has become a symbol of West Cork but is in fact native to Chile. Similarly, the bright orange montbretia is native to South Africa but is seen all over our landscape.

‘Both of these plants have been accepted and loved as locals,’ says William.

By firstly identifying what grows on our landscape and what is native or non-native, William then wanted to tie this in with the people who live on our land.

‘I was interested in different perspectives, people with different views on the landscape,’ he says. 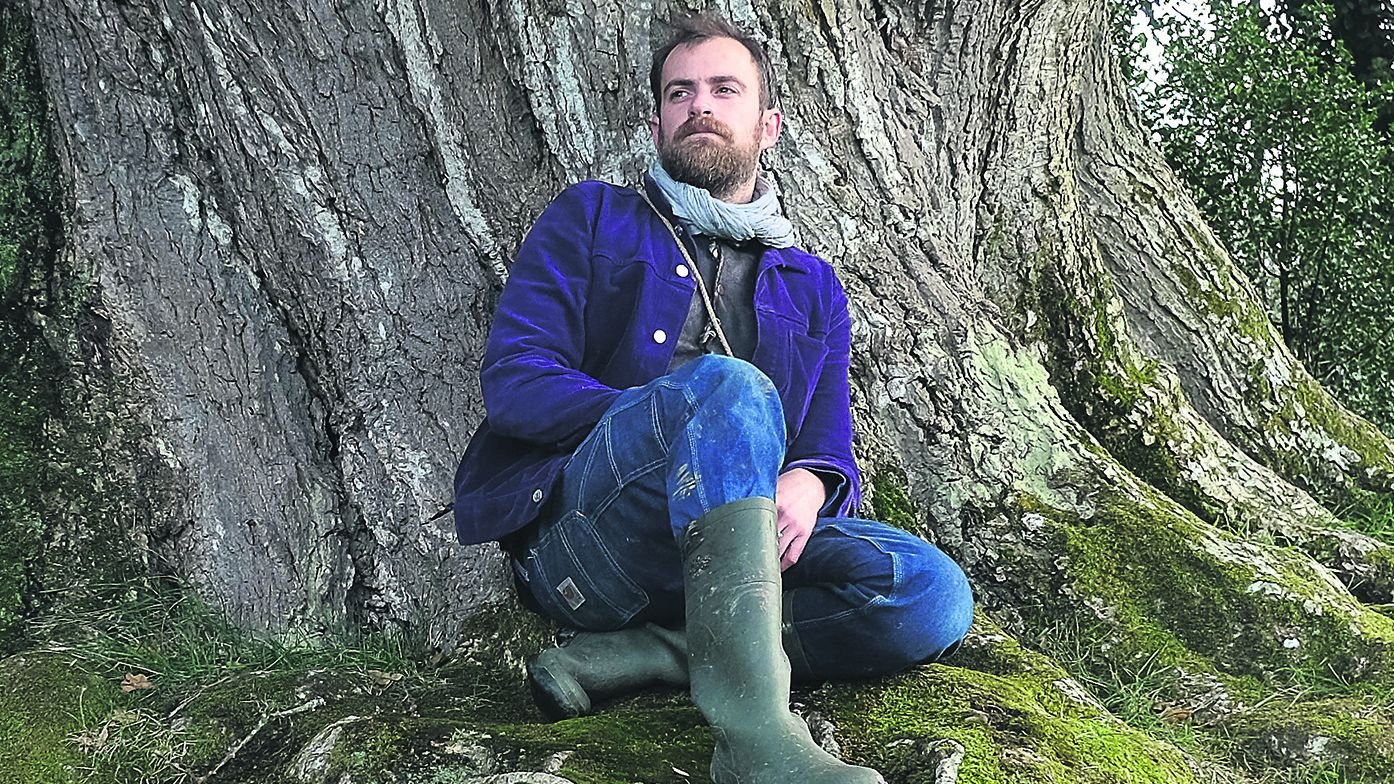 William divides his time between Skibbereen and London.

After a conversation with Donna Treya of West Cork Development Partnership, William met with individuals living in the Clonakilty Lodge direct provision centre and over the course of six months, he recorded conversations with them as they walked the lands of West Cork.

What started as just William walking and talking with the asylum seekers, evolved into inviting others, including some local residents, who got a chance to walk in the others’ footsteps and listen to their voices; voices which often aren’t heard.

William spent time building up relationships with everyone, he wanted to get to know them, he wanted them to be able to step away from their experiences as asylum seekers and instead just walk and talk.

‘They talked about integration into the environment here, their perspective of the landscape, they talked about migration and their experiences in Ireland, the conversations brought up memories from their home and uncovered hidden stories,’ says William.

The project transitioned from just doing walks to doing more with the asylum seekers. William and musician Justin Grounds spent time with them in Clonakilty Lodge creating sounds to complement the conversation recordings.

‘We wanted to create sounds with the participants. We took instruments into Clonakilty Lodge for a session with Justin. At one stage we were looking to make a suppression noise. A South African woman was going making a native noise but needed some rhythm, so we all started drumming and she started making the noise. We were in this tiny room, but it became this really powerful space,’ says William.

Lora from Nigeria is one of the participants who was involved in the project. She says that in order to succeed and realise your creative dreams back home, you need to be somebody of importance, but this project helped her to see that things could be different for her here.

‘In Nigeria if you don’t have a voice, if you are not influential or rich, you cannot actualise that goal. Here, if you have something on the table, even if it’s not perfect, there are people out there that will listen, it’s very different here. This project gave us a chance to develop our talent more,’ says Lora. 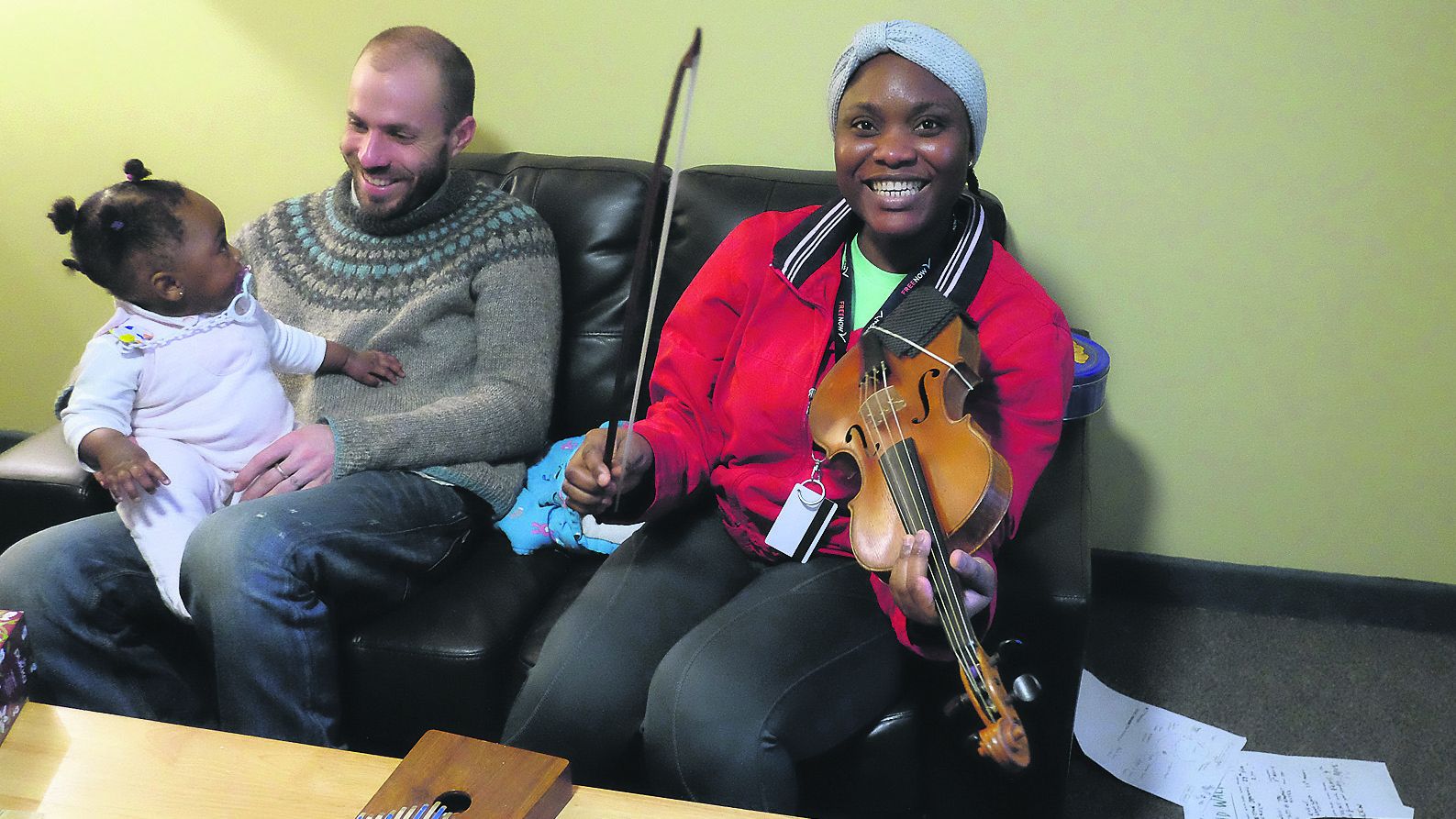 Lora and baby Kinna with musician Justin Grounds put the finishing touches to the project.

Khanyo also participated. She says that often there is a stigma around people living in direct provision and this project gave her a chance to show who she is, what she has and what she can offer.

‘It’s about being heard. In direct provision, sometimes you feel like an outcast, you are not listened to. But when you get projects that are able to take you out of that, you have a feeling of being involved, whatever you have inside of you, you are given a chance to flourish.’

William went on to work with Justin and artist Michael Holly to edit the recordings and create a soundscore that others can listen to. William recommends that they are listened to while out walking the same locations as the participants walked, which include Inchydoney, Lough Hyne, Old Railway Clonakilty, Drombeg, Kilgarriffe Church, Tralong and Tobarín Súl Well.

As well as the recordings, an exhibition and series of talks were organised to give a space to continue the conversations that took place on the land and to open those conversations up to the public. While some events have been postponed, some of the talks have migrated online and are available on the Land Talks page on Facebook.

You can listen to the recordings at www.landwalkslandtalkslandmarks.com