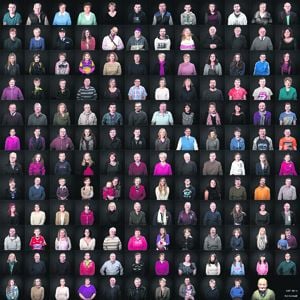 IT was a snapshot of all the people living in Kilbrittain village and one year on, Ed Godsell’s ‘Kilbrittain People’ Book is still proving popular with both locals and visitors alike.

The photographer and filmmaker took a portrait photograph of as many people living in the village as possible in order to create a record of the village as it was on the weekend January 11th 2014.

‘This was a local community project which was sponsored by Cork County Council and its aim was to capture the history in one time in the village,’ said Ed Godsell speaking to The Southern Star.

‘We took over 180 colour photographs of the people of the village in the parish hall who turned up over that weekend.’

A total of 146 people from the village got their portraits taken and Ed and his team also took down some basic information about the people who were taking part in this social document of the village.

‘It was a very interesting project to be a part of and we published three copies of the book,’ said Ed.

‘One is with Cork County Council, and I have another one myself, and one is in Kilbrittain Parish Hall. Because they are all colour photographs, the books costs about €120 to buy, so they are pretty expensive.’

As well as taking their pictures, the team gathered information about the people, which included their ages, occupations and how long they have lived in the village. Some of the information they found out was that the average age of people in the village was 38.4 years, that there were 72 males and 75 females with 12 people over the age of 70, and 60 people were born in the village.

Also there were 44 students who took part, 12 housewives and 14 retired people, along numbers of other occupations including a camera operator.

Ed is also an accomplished filmmaker and one of his most recognised documentaries The Shed covers the demolition of the infamous shed at Turners Cross, home to Cork City. In the documentary, he subsequently found that part of the shed ended up in a farm in Kilbrittain. His documentary was later shown at the Cork Film Festival.

As well as a director, he is also a camera operator and self-shooter and directed the Obama documentary, The Road to Moneygall as well as working for RTE programmes like The Fear and Dirty Old Towns.

Ed is currently in the middle of filming a documentary on O’Donovan Rossa around the country.

Kilbrittain People is available to buy on www.burb.com