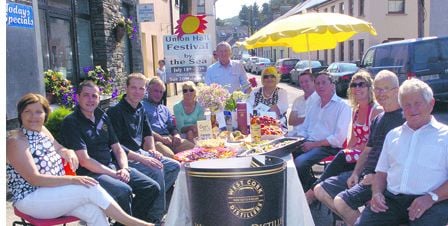 Union Hall festival organisers are hoping that the sun will shine again for this year’s events.

UNION Hall Festival by the Sea 2015 kicks off on July 22nd and continues until the 26th.

It is once again full of fun activities for all the family. Kicking off the festival this year is Monster Bingo in the Community Hall with a prize pot of €1,000 at 9pm on the 22nd.

For all you keen readers out there, Thursday 23rd has just the event for you: Cliona’s Wave, a novel about strife and struggle in 1940s’ Union Hall and ‘loosely based on a family story,’ is being launched by Doolin-based author Dónal Minihane (grandson of the late John and Rose Minihane, Ballincolla.

The launch will take place at Casey’s Bar, Union Hall, at 9pm.

Following a successful night last year and great feedback from all that attended, we have decided to hold a Gala Night once again on Friday 24th. The limited amount of tickets available and selling fast; contact any one of the festival committee or local businesses to secure your ticket.

Saturday, July 25th, is a fun-filled day for all the family kicking off with the Michael Tobin Memorial Angling Competition and the Joe Regan Memorial Football Blitz.

The afternoon is then filled with entertainment in the Blackfield with a kiddies’ treasure hunt followed by children’s sports, bouncing castles and much more.

Patrons then get to sit back, relax and be entertained by Open The Taps as well as having a tasty Glenmar Shellfish barbecue with the ‘Catch of the Day’ from the earlier angling competition. To finish off Saturday events, people can once again get a chance to see how lucky they are at a race night in the Community Hall at 9.30pm.

All good things must come to an end and the 2015 festival closes on Sunday 26th with an array of entertainment in the village.

There will be a festival market fair from 2pm as well as busking and the Wobbly Circus Display.

As the festival draws to a close, it is hoped people will join them for a number of hours of music, starting with Open the Taps at 6.30pm, followed by Bog The Donkey.