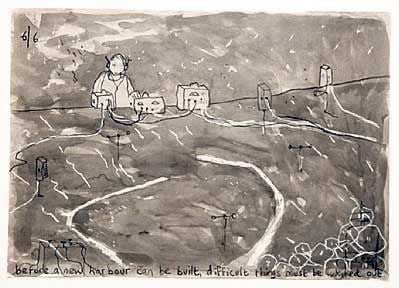 BALTIMORE-based artist Tess Leak was one of the first recipients to be granted an artist-in-residency programme at the new West Cork Arts Centre in Skibbereen, ‘Uillinn’.

Her three-month residency at the building culminates in an exhibition of her work at the centre, which opens on May 9th.

Her show, a combinatinon of ink drawings, felt-based pieces and miniatures, will be accompanied by a piece of music which she commissioned specially for the event.

Clonakilty musician Justin Grounds’ piece will be performed by the Vespertine Quintet, of which Tess is a member, where she plays the cello.

The piece also includes music for a ‘phono-fiddle’ – an instrument which Tess recently inherited from her grand-uncle, music hall performer Frank Clifton.

Tess has titled her exhibition I shall make for my own castle – a line from an old English work, which she says reflects the symbolism of a castle being, not just a fortress, but a symbol of inner refuge for the individual.

Tess graduated from the Sherkin Island/DIT course in art in 2009, and has been working in West Cork since. She is also involved in the Arts for Health scheme which integrates the arts programmes into the culture and practice of healthcare settings for older people. It takes place in five Community Hospitals and five day care centres as well as Bantry General Hospital.

She also works with Perrott House in Skibbereen, which is part of the HSE’s mental health services, and will be launching a book of poetry as a result of a collaboration with the service users there.

Her exhibition will be officially opened, with a performance by the Vespertine Quintet, at 7.30pm on Friday, May 8th, and will be open to the public, from May 9th to June 11th, at Uillinn in Skibbereen.