The late John 'Red' O'Donovan from Leap in action in Caheragh last year.

BY KIERAN McCARTHY THE local horseracing community is 'much the poorer' without the late John 'Red' O'Donovan who died in a tragic accident near his home in Leap last Sunday morning. 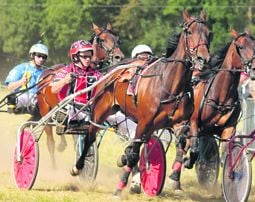 The late John ‘Red’ O’Donovan from Leap in action in Caheragh last year.

THE local horseracing community is ‘much the poorer’ without the late John ‘Red’ O’Donovan who died in a tragic accident near his home in Leap last Sunday morning.

O’Donovan (27) was laid to rest in Leap cemetery on Wednesday afternoon as West Cork mourned the loss of the popular Red John, as he was known.

His body was recovered from a swollen stream close to his home in Leap on Sunday morning, and it’s believed he lost his footing and slipped on his way home from a night out in Skibbereen.

A carpenter by trade, O’Donovan was a well-known figure in the trotting and harness racing circles, described by Tim Kelleher, chairman of the Irish Trotting and Harness Racing Federation (ITHRF) Horse Owners as ‘a gentleman who lived his dream every time he competed’.

Known as Red John because of his racing colours, he owned, trained and drove his own horses, such as Blazing Bad Zulu, Totally Nuts, Mr Security and Bonkers.

‘John was a hard-working member of the executive of the ITHRF and he was very popular with everyone involved in the sport,’ Kelleher said. ‘He was steeped in racing and he’d often venture up to Portmarnock to take on the best there was, and he’d beat them too.

‘One of his biggest wins came in the Paddy Connolly Memorial Cup in Ballabuidhe a few years and everyone was delighted. He was always willing to help out in any way he could, that was one of the great things about him. He was a gentleman who lived his dream.

‘It’s important to remember, too, that he was involved in both disciplines because, not only was he prominent in trotting circles, but he was also an accomplished driver on the harness racing scene.

‘Everyone involved in the horse racing community is going to miss John and what he brought to our sport. We are much the poorer without him.’

‘John might have only played underage football for the club but he left his mark, as a tight tigerish corner back who never gave up on any ball and always gave his all for the green and gold of Kilmacabea,’ a club statement said.

‘All associated with the club would like to extend their sincerest sympathies to his mother and father, Patsy and Michael, his sister Emily, brother Michael and also his girlfriend Marian.’