Artist Mark Cronin at the launch of the 7th Corona Fastnet Short Film Festival in Schull. It runs from Wednesday May 20th until Sunday May 24th, with guests including FA chairman Greg Dyke and director Lenny Abrahamson. 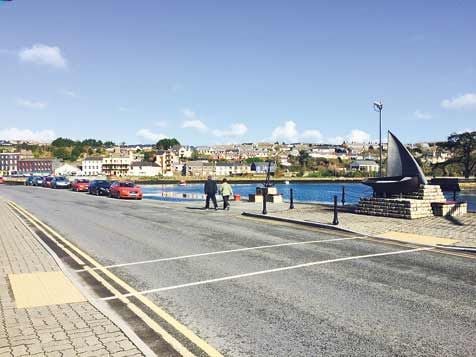 Kinsale: parking is seen as expensive.

A KINSALE business owner is calling for a relaxation of on-street parking charges in the town.

Ciaran O’Connor, of O’Connor Pharmacies on Pearse Street in the town, said the cost of parking in Kinsale is one of the highest in Cork county.

‘We, as traders in the town, don’t feel that there is a level playing field in relation to parking in other West Cork towns. Footfall in the town has no doubt been affected by the cost of parking which is €1.20 per hour, and there is also no free parking period, like they have in Bandon,’ said Ciaran, speaking to The Southern Star.

‘There were a series of promises made to us about the cost of parking before the local elections last year and still nothing has changed.’

Ciaran and his fellow traders have set up a petition in the past few weeks, with over 1,000 signatures from fellow traders and customers calling for a change to the cost of parking.

‘The perception that Kinsale is full of wealth and yachts and tourists is wrong. As a town we are affected by this levy and it can deter customers from shopping in the town. While we do get tourists, my bread and butter are the locals who shop in the town and the cost of parking could easily affect their decision to shop in Kinsale.’

At a recent meeting of Bandon-Kinsale Municipal District, Cllr Margaret Murphy O’Mahony proposed motions regarding the restrictions in both Kinsale and Bandon.

Cllr Murphy O’Mahony called for a period of one hour free parking to be introduced in Kinsale, as well as the price of parking to be reduced to 80 cents an hour. She also proposed that the free parking period in Bandon be increased from a half hour to an hour.

‘This has been ongoing for a long time and we were supposed to have a special meeting before on the issue of pay parking in both towns. I have always been against pay parking in the town,’ said Cllr Murphy O’Mahony.

However, Cllr Kevin Murphy tabled a counter motion saying that they should wait until the figures come in from Kinsale.

Cllr Kevin Murphy agreed that there should be a reduction in parking in Kinsale, but that the proposal was premature.

‘We are obliged to take into consideration the Cork County Council Parking Policy Document 2015 and we need to have the facts and figures first to see how a reduction in the charge would affect revenue,’ said Cllr Kevin Murphy.

‘We would also need to change the bye laws and there is no point going in without public consultation. We need to know the impact of reducing the cost.’