Arthur Griffith, Eamon deValera and Michael Collins at an All-Ireland Final in Dublin in 1921. 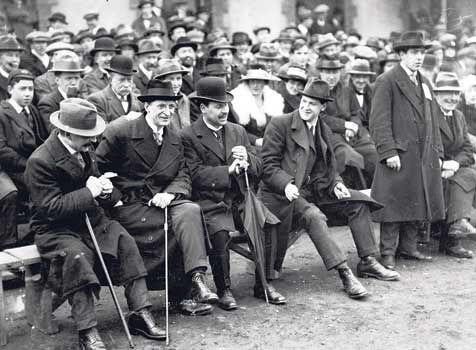 Arthur Griffith, Eamon deValera and Michael Collins at an All-Ireland Final in Dublin in 1921.

CORK’S Mercier Press has announced, that due to popular demand, they are re-issuing; Michael Collins, Himself.

The book, which was first printed in 2003, delves into Collins’ complex character and life, rather than his political contributions.

Unlike most of the publications written about one of West Cork’s most famous men, it focuses on the man behind the mask, not the soldier, statesman or guerrilla.

Written by Chrissy Osborne, it offers a unique approach by offering insights into Collins’ personal life and the crucial role women had to play in it – his likes, dislikes, interests and personality.

Chrissy Osborne was born and educated in England. She had an interest in Ireland and its history from an early age, as her father’s family came from Kilgarrif outside Clonakilty in West Cork and she spent many holidays in Ireland during her childhood. This was, of course, just a few miles from Woodfield, where Michael Collins was born in 1890. Chrissy was also delighted to discover that a great-uncle of Michael’s, and a great, great, great-uncle of hers, were next-door neighbours, in Kilgarrif in the mid-nineteenth century.

It also includes the memories and anecdotes of members of his family and descendants of those who knew him. The book is accompanied by photographs of the man at all ages, as well as places and people associated with him.

The book features a foreword by historian and author Tim Pat Coogan, who describes it as a ‘gentle picture of some of the man’s more endearing traits’.

‘To think of him limed merely in a family glow, as it were, would be akin to basing one’s impressions of his beloved West Cork coastline on a summer holiday spent sailing from places like Clonakilty, Union Hall, Baltimore or even Schull, along by the Fastnet, without even knowing what the area looked like in a winter storm,’ writes Coogan.

Michael Collins, Himself will be available nationwide for €14.99 from July 28th.