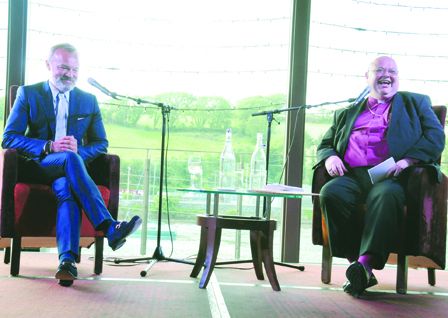 ‘AM I your first bishop?’ asked Bishop Paul Colton, to much laughter, as he quizzed TV presenter Graham Norton in Bantry last Friday night.

The Church of Ireland bishop was the inspired choice to host An Evening with Graham Norton, which was one of the highlights of this year’s West Cork Literary Festival.

From the first suggestion of the unusual – but wonderful pairing – this was a sure-fire winner for the festival organisers, who sold out the ballroom of the Maritime Hotel in no time, and indeed a second night would have certainly garnered as much, if not more, interest.

But those of us clutching our coveted tickets weren’t disappointed by the promise of a great night’s entertainment.

With so many other Friday nights this year spent watching the Bandon man in action on the BBC, it was a fitting night for this hour-plus of questions, observations and general silliness, based on Norton’s latest autobiography (his second) – the Life and Loves of a He Devil.

Bishop Colton – himself a long-time friend of the Walker family (Graham’s birth name is Walker) – proved every bit as worthy of the stage as his willing interviewee, as the duo swapped stories of life in West Cork and parties in neighbours’ houses down the years.

‘We always knew he was special,’ said the bishop, adding that it wasn’t because he was Protestant (‘because at those parties, we all were’) or gay (‘I don’t think he even knew at that stage’) but because he was such a warm, charming and entertaining young man.

Graham almost blushed at the accolades, but later added that his mother appeared horrified when told who had agreed to interview her son on stage.

She had ‘boycotted’ the night as a result, Graham joked, given that her beloved bishop was consigned to asking questions about the book.

She hadn’t read it, Graham told the audience, and he hoped she never would. Neither had his sister, once telling him: ‘But there are so many good books to read!’

Bishop Colton joked that the book nearly caused marital disharmony in his own home, with his wife having left it behind in a hotel in the US before he had a chance to read it.

He’d had to buy a second copy he said, but had ‘enjoyed it very much’.

The television personality – who came to prominence in this country for his own quirky portrayal of the clergy – (as Fr Noel Furlong in Fr Ted), was greatly matched by the quick wit of the man who had once married ‘Posh’ and ‘Becks’.

‘And, no, I am not best friends with my guests,’ explained Graham, puncturing the myth, as he put it, that they all leave the studio together to attend wild and glamorous parties after the show.

‘What you see on television is usually as much time as I get with them,’ he said.

He exploded another myth, too, when he said the ‘red chair’ is not quite as dramatic as the camera might suggest. ‘We ask people to really kick their legs up high, because it’s actually quite low,’ he told the audience.

He explained how important his two months every summer, at his West Cork home in Ahakista, were for him.

He often brought friends over to share West Cork with them, and he recalled a time he brought some friends over from the UK for the annual Ahakista Regatta.

‘They had a very different kind of regatta in mind,’ he said, to a very knowing audience. He added there was much fun when the announcer on the race tannoy said one of the rowing races was a ‘photo finish’.

‘Oh how glamorous,’ we thought, revealed the presenter. ‘And then the announcer added: “So if anyone has an photograph of it ...”!’

Members of Bantry Youth Group had once asked him what being famous was like, he said. Being famous was ‘a bit like living in Bantry’, he had explained – when you are in SuperValu and you spot someone coming at you that you’d rather not have to talk to – a line that produced much hilarity in the town audience.

But one audience member summed him up when it came to the Q&A session from the floor: ‘How do you manage to be so NICE?’ asked Caroline.

As Graham stayed on long after the show, signing books and posing for numerous photos and selfies, we all felt duty bound to agree with Caroline’s sentiments.