A thing of the past: workers removing the public telephone box at the top of Ilen Street in Skibbereen in 2017. The first public phone boxes in West Cork towns arrived in 1950.

ON May 10th 1922, Skibbereen’s town clerk placed a notice in The Southern Star, urging would-be subscribers to send him their names. By then, telephones had been ringing across the world for almost 50 years.

In 1876, when Alexander Graham Bell showed his ‘apparatus’ to US President Rutherford B Hayes, he apparently replied: ‘That’s an amazing invention, but who would ever want to use one of them?’ Just imagine his reaction to a recent Deloitte survey, which revealed that Irish people check their mobile phones on average 58 times a day!

The United Telephone Company established the first Irish telephone exchange in Dublin in 1880. With only five subscribers, the young boy who ran it grew bored, and often went outside to play marbles. By 1893 an exchange had been built in Cork, and some 30 subscribers soon came forward in Bandon.

Speaker after speaker sang the praises of the telephone at a public meeting in Skibbereen Town Hall in September 1919. Unlike the laborious tapping out of telegraph messages, telephone contact was instant: someone in Bandon could address another in Dublin ‘as if they had a personal conversation’. A local call was cheap, and a ‘party’ line could be shared with neighbouring farms for only £3 per annum. 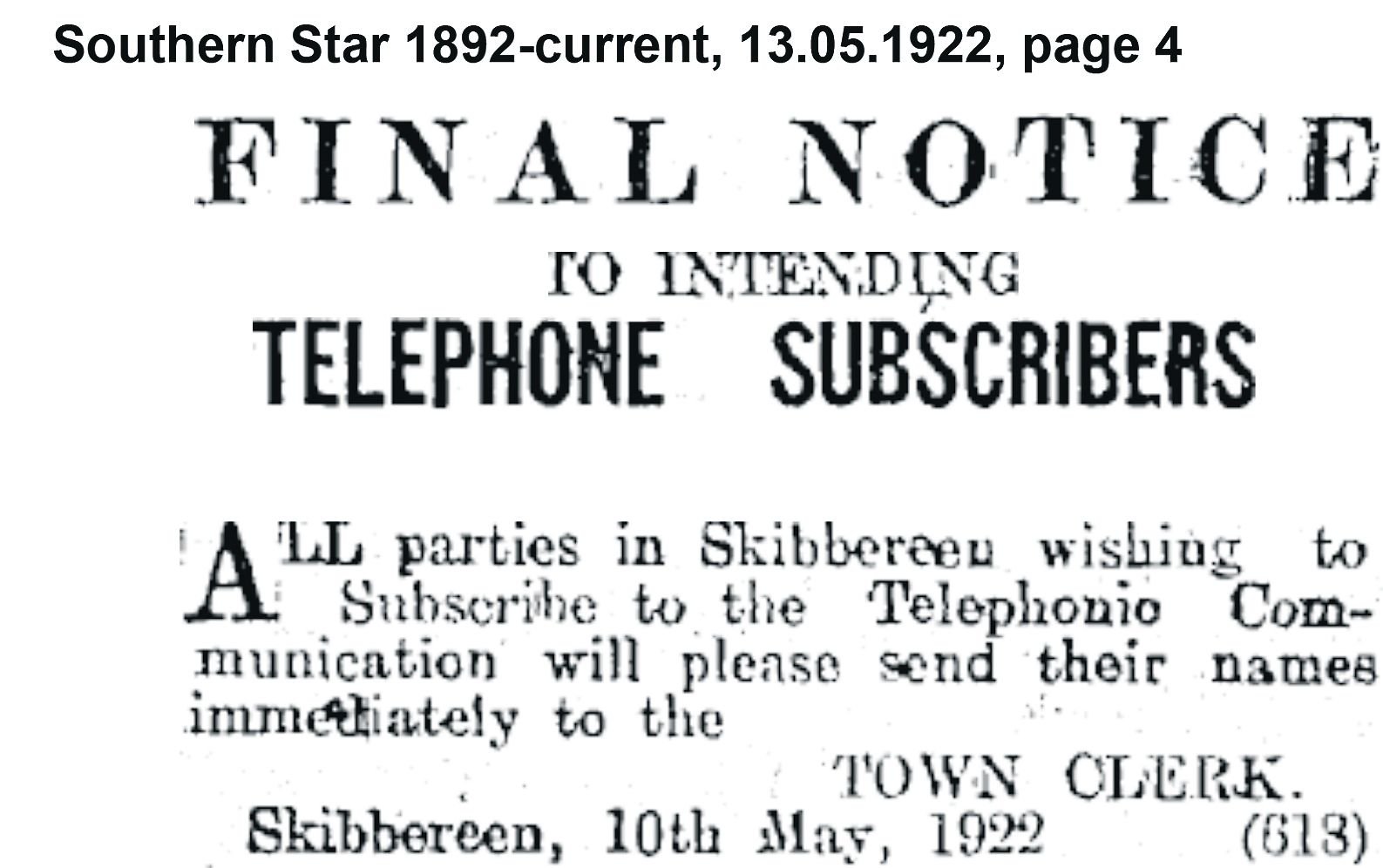 A call for subscribers in Skibbereen in May 1922’s Southern Star.

The telephone offered help in emergency. Cape Clear was sometimes cut off from the mainland ‘for a week at a time.’ With a connection to Castletownbere, a doctor could rush to a sick person in remote Ardgroom. If machinery broke, farmers could order new parts without going into town or writing a letter, phone the nearest railway station to arrange collections and deliveries, and summon a vet to examine sick horses and cattle. Butter and egg merchants could check the latest prices ‘in a few seconds’, and fishmongers order their supplies from herring-curers in Berehaven.

Many envisaged the device becoming ‘as common as the gas meter’ in people’s homes. But the Postmaster General was against a ‘costly extension’ into Ireland’s extreme southwest.

According to Seán Creedon, for many years the only phones could be found in the post office, the house of the parish priest, doctor or vet, and maybe in the odd pub and hardware shop.

The phone arrived in Macroom in 1924. Other places promptly appealed, but their requests were put on hold for a couple of years.

Users were offered help on how to manage the new equipment: ‘The lips should be as close as possible to the transmitter mouthpiece’, ‘it is rarely necessary to speak loudly’ and, crucially, if you need to leave the phone during the conversation, ‘do not replace the receiver!’

Telephone numbers were published in a directory, which might become ‘quite a drawing room article’ by adding a stiff cardboard sleeve covered with velvet, announced J Cullinane & Co of Bantry.

In 1942, Bere, Whiddy and Dursey Islands were blessed with the phone, thanks to exchanges at Castletownbere, Bantry and Garnish respectively. But only telegraph messaging was available at Cape Clear, Sherkin and Heir Islands until 1954-55. 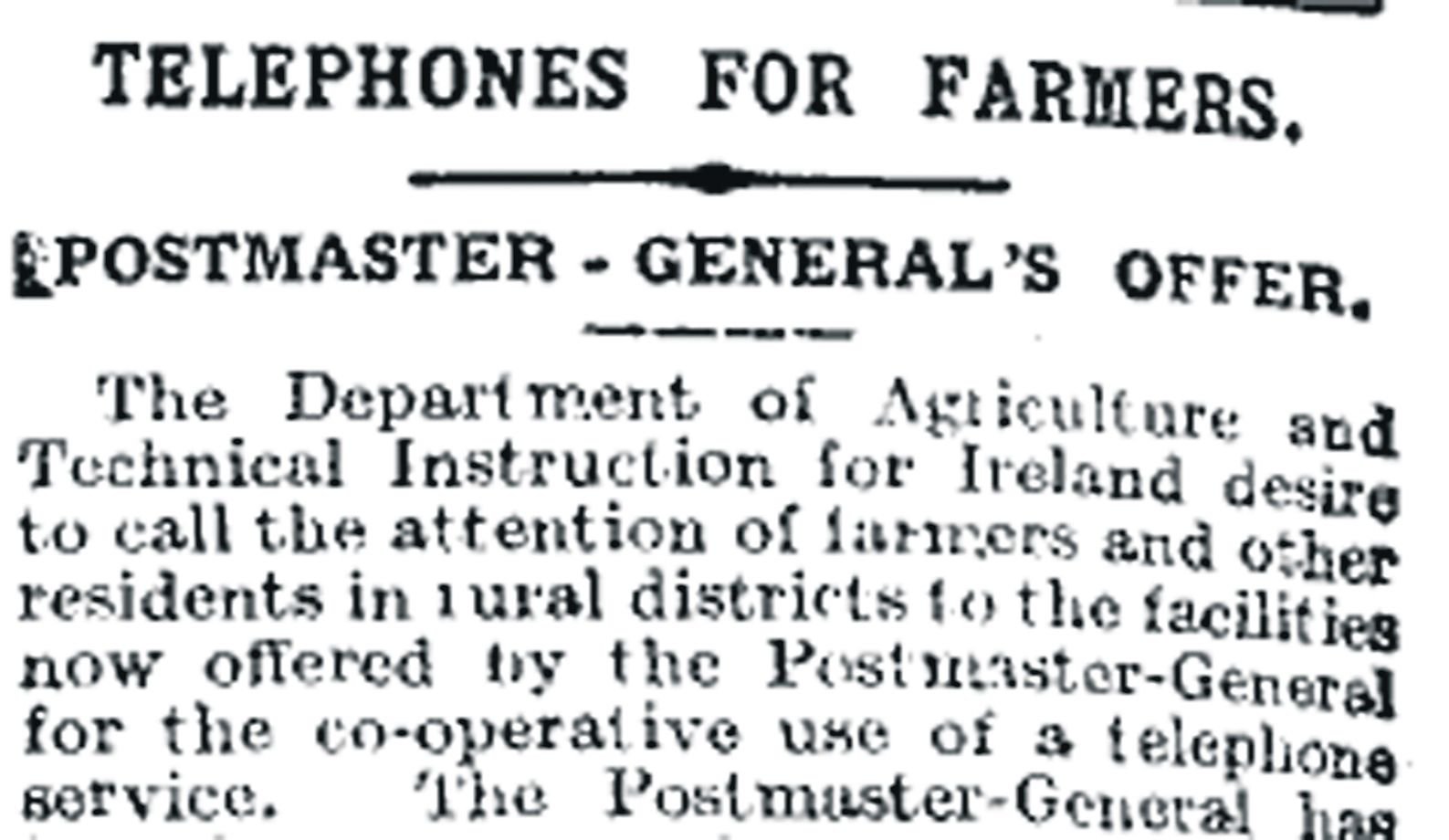 Lines being offered to farmers in the Skibbereen Eagle on May 30th, 1914.

Connection costs were high, and some subscribers demanded a reduction in the ‘enormous rentals’ of £7 10 shillings pa. Several Kinsale residents asked to be disconnected, one describing the device as an ‘expensive habit’, another arguing that businesses had coped well enough in the past without the phone.

The first telephone kiosk in Ireland was erected at College Green in Dublin in 1925, but West Cork was kept hanging on for another quarter of a century for its boxes. In October 1949 a kiosk was installed outside Kinsale Post Office. By spring 1950, kiosks had also made their appearance in Skibbereen, Bandon, Bantry, Macroom, Dunmanway, Glengarriff and Clonakilty.

Communications Minister Jim Mitchell made the first mobile phone call in Ireland on  December 11th 1985. Unlike the pocket size smart phones we carry around these days, early gadgets were the size of house bricks!

Reception was frequently poor. In Macroom, ‘you might as well be talking into a packet of 20 cigarettes than talking into a mobile phone’, complained Council chairman Denis Kelleher (Southern Star March 18th 1995).

If people once moaned about crackly and crossed lines, now, in the era of mobile phones, we are still whingeing – about weak signals and short battery life!