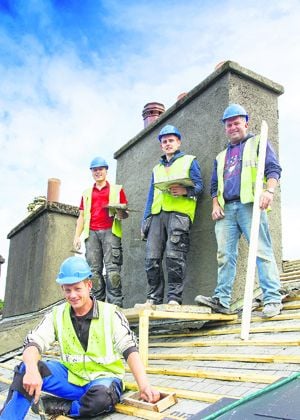 THE World Skills Championships 2015 in San Paulo in Brazil might not mean a lot to you, but to one West Cork man it does mean the world.

John Murray, a 21-year plasterer from Dromerk in Dunmanway – the son of proud parents Jerry and Susan Murray – began working in the building trade five years ago, but it was only in 2011 that he began his apprenticeship. Little did he know that four years into his five-year apprenticeship he would have been selected to represent Ireland.

His employers, Hurley & White Builders of Dunmanway, spotted his talent from day one and urged him to apply for an apprenticeship – a skill that would stand to him and be his passport to work anywhere in the world.

‘We could see that there were great things in store for John for a variety of reasons. For starters, he is an incredible worker, he is very talented, and has a great eye, which means his finished work is flawless,’ said Tony White, who co-founded the business with Martin Hurley in 1997, and was joined by Tony’s brother, Declan, in 2008.

‘Over the years, we have seen a lot of workers in the trade, but John, it has to be said, is exceptionally talented and we are delighted for him that his course supervisor at FAS put him forward for the World Skills Championships.

‘Initially, the prospect of flying halfway around the world was daunting for John, but he was eventually persuaded that this was a once in a lifetime opportunity,’ said Tony.

‘Of course, it could mean that John will be poached for his talent, but we would never stand in his way in that regard. Having said that, he is very fond of West Cork in general, and Dunmanway in particular, so we hope John will remain with Hurley & White Builders for many years to come.’

Three months ago, John allowed his name to be put forward for the national finals and he, being an unassuming type of individual, was most surprised, but definitely delighted, when they announced that he was the winner.

An interesting aspect of the win is that the cost of sending him to the world championships in Brazil will be €24,000 – a figure that will include everything from his flights and accommodation to his training prior to taking part in the six-day event, which starts on August 7th.

FAS has agreed to finance the trip, and his employers are arranging a special send-off, scheduled to take place this Saturday, August 1st.

John explained just how intense the six-day championship is likely to be. He told The Southern Star: ‘The event itself will take place on a 2.5 acre site in San Paulo and there will be 18 countries vying for the top spot in plastering – not to mention the countless other trades in construction, motoring and technology.

‘I thought the national event was a challenge, but this is going to be an experience I am unlikely to forget.

‘I feel privileged to have been chosen and I hope to do my employers, and my country, proud.

‘Win, lose or draw,’ John said, ‘I am looking forward to going back to work on Monday, August 17th. It will be good to be back working with my plastering boss, Arthur, and the rest of the plastering crew – Jim, Ger and Jack.’