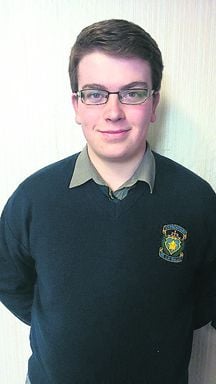 Michael Keohane: up for community award

STUDENT Michael Keohane from Baltimore, Co Cork, a contributor to The Southern Star, has been recognised for the motivation, service and impact he has demonstrated for his local community as a 2015 Pramerica Spirit of Community Awards top 20 finalist.

Michael who is a sixth year student from St. Fachtna’s De La Salle in Skibbereen, promoted youth mental health by helping to found and establish the ‘Youth in Action’ project ‘Skibb Scenes’ in January 2013, offering cinema facilities and a social outlet to young people in the local community.

Having suffered a number of setbacks with his own mental health, Michael set up supportive workshops around the theme of ‘Skibb Smiles’ and through the COPE Foundation in Skibbereen, working closely with clients suffering intellectual disabilities. In August 2014 Michael took on his biggest challenge with the Aurelia Trust and travelled to Romania to work with young disabled adults who had been institutionalised from birth.

‘I was approached by my local newspaper (The Southern Star) to become a youth reporter and have written several articles about the tasks that face young people in our local community,’ said Michael.

Students from all over Ireland, will be presented with €50 and an engraved medallion at the awards ceremony on March 12 in the Slieve Donard in Newcastle, Co Down, by special guest Brent Pope.