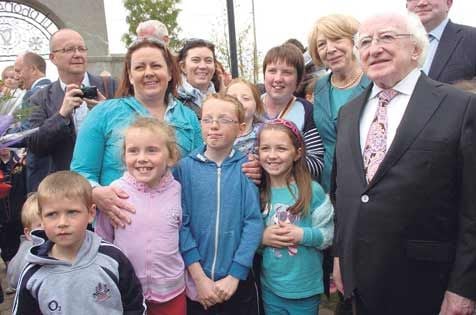 THE hundreds of people who turned out at the beautifully-refurbished O’Donovan Rossa Memorial Park in Skibbereen last Thursday afternoon, to see President Michael D Higgins unveil a new piece of sculpture, left with a much better appreciation of Rossa’s important place in Irish history after the stirring speech, he delivered.

He also launched a series of events throughout West Cork and beyond, taking place over the coming weeks to commemorate the centenary of the death of Jeremiah O’Donovan Rossa, which occurred in New York on June 29th, 1915.

These will culminate in a State commemoration at Glasnevin Cemetery in Dublin on August 1st, the 100th anniversary of Rossa’s burial there, which will also be the first official event of the 1916 Easter Rising centenary programme, acknowledging the West Cork-born Fenian’s pivotal role in inspiring its leaders.

He extended a warm welcome to the members of the public and thanked everybody who helped in any way with the commemorative project before introducing the President, who unveiled a monument to mark the centenary consisting of five totems of corten steel containing various words and images relevant to Rossa’s life and times.

President Higgins spoke of how Rossa’s ‘memories and terrible experiences were to influence his entire life’ after enduring the horrors and hardships of the Famine as a young boy in the 1840s, his ‘righteous anger at a great wrong’ and how O’Donovan Rossa was willing to ‘suffer and be strong, defiant and rebellious in his convictions.’

Having founded the Phoenix National and Literary Society in Skibbereen in 1856, Rossa’s subsequent Fenian activism saw him jailed in England, where he was cruelly treated, but he was never willing to compromise on his ideals, which won him great admiration among a new generation of revolutionaries at the start of the 20th century. The President pointed out that half a million people lined the streets of Dublin to witness and pay their respects at his funeral, ‘astutely organised by a committee whose membership included many of the central figures in the (1916) Rising.’

Concluding an oration, delivered bilingually with great empathy and passion, President Higgins urged his attentive audience to honour Rossa by making a special effort to preserve the Irish language, which he so cherished.