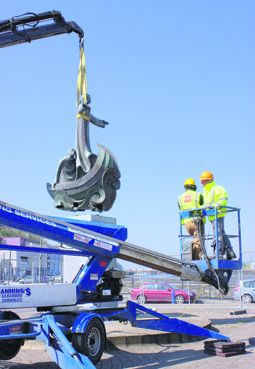 The statue of St Brendan the Navigator being removed from its plinth in Wolfe Tone Square, Bantry, this week for remedial works. (Photo: Clive Barton)

CORK County Council workers removed the St Brendan statue from the Square in Bantry earlier this week because of safety concerns.

The statue, designed by German-Irish sculptor Imogen Stuart and erected in 1969 to mark the opening of the Whiddy oil terminal, had become unstable in recent months and the decision was taken to temporarily remove it.

The bronze statue has been to the National Sculpture Factory for refurbishment – which, it is understood, will take several months.