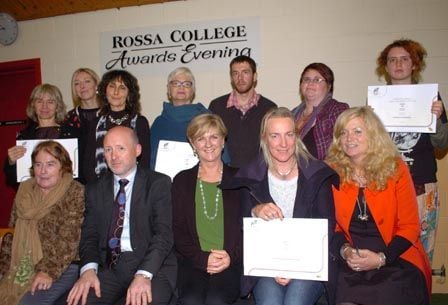 FETAC Art Level 6 tutor at Rossa College, Ms Aisling Roche, made a special presentation to Mary Scroope at the 2014 FETAC awards ceremony, held recently at the college in Skibbereen.

Ms Roche said Ms Scroope had been an ’incredible inspiraton’ during her seven years as a student at Rossa College. Ms Scroope is now studying at the DIT BA in Visual Arts course on Sherkin Island.

Ms Terri Kearney, author and manager of Skibbereen Heritage Centre, guest speaker, explained she was one of the first graduates in the VEC technical building in North Street, Skibbereen, which had been the predecessor to Rossa College.

She finished her Leaving Cert on a Wednesday and started work on the following Monday as a 17 year old in the 1980s when there were no jobs and considered herself very lucky to be able to return to education. She added: ‘Fourteen of us started in the VEC technical building and 12 of us did the Dip and two of us went on to do the Degree. It enabled me to get the piece of paper I needed to change my job.

‘I have developed an addiction to learning - two certificates, two diplomas and an MA - so I know firsthand all the effort it has taken to get you here tonight. I feel very honoured to be the person who hands you your reward. A person can learn anything they need to learn, but the proven ability to learn is the most important thing in life today.’

Mr Stephen Gilbert, principal of Rossa College, extended his appreciation to Ms Kearney and to Mr Tony Twomey of the board of management. He congratulated all who had taken up the challeenge of going through a FETAC Level 5 or 6 and come out the other side.

He also acknowledged the difficulties students faced, perhaps returning to education after a time of unemployment or having been out of education for some years. He continued by thanking the students for choosing Rossa College, the families for their support, and the tutors for the time and effort they put in to the extensive range of courses available.

Mr Gilbert also thanked the college’s ancilliary staff, Mary Leahy and Pat O’Sullivan and made special mention of Mary O’Mahony, school secretary. whom he credited with ‘keeping things going’. He thanked Ms Annette Murphy, who had organised the evening, and deputy principal Mr Tom Foley ‘who works tirelessly behind the scenes’.