Sophie Healy Thow was invited to give a TedX talk 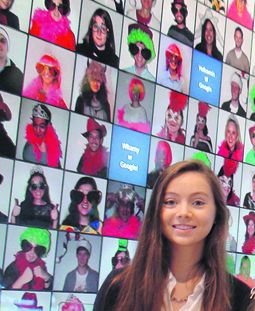 AN award-winning Kinsale student made an impassioned call to action on the world food crisis at a TEDx Event held in Dublin recently.

Sophie Healy-Thow, (17), who was named one of Time magazine’s Top 20 most influential teens in 2014, was speaking at the event organised by Future Voices Ireland, the Irish human rights charity that empowers marginalised young people.

Sophie’s TEDx talk was entitled ‘Food Security – Everybody’s Business’ and it struck a chord with both the audience and the wider community, with institutions like the EU picking up on her impassioned plea to put food security at the top of the social and political agenda.

‘To be asked to speak at a TEDx event was huge and I was so honoured to be invited and to be able to speak on the topic of food security,’ said Sophie.

‘Future Voices Ireland is doing a tremendous job giving a voice to the voiceless and marginalised in our society and it was a pleasure to be part of something so inspiring,’ she added.

During her inspirational speech she pointed out that millions of people are suffering from chronic hunger, despite the fact that the world produces enough food to feed people twice over. She called for a greater co-operation between business and government along with more joined-up thinking to eradicate the inequalities as well as more and better education for young people on food value.

Sophie now has a busy summer ahead with a trip to the Galapagos Islands with National Geographic, and to London to work as a leader at the London International Youth Science Fair.