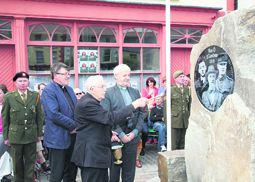 Canon Denis Keane performs a blessing, assisted by Dean Chris Peters and Fr John McCarthy PP, at the recent unveiling of the Three Patriots monument in Rosscarbery. O’Donovan Rossa will once again be remembered, in Skibbereen on July 24th. (Photo: George Maguire)

SKIBBEREEN is set to be transformed into a 19th Century town on July 24th, as part of a host of local events that will be celebrating the life of Irish patriot Jeremiah O’Donovan Rossa.

The event will begin at 7pm and to truly create the 1800s aesthetic and atmosphere, a torchlit parade will take place, with all participants dressed in 1800s attire.

The parade will march from the Heritage Centre to the Maid of Eireann statue, and back to the bridge.

The local town businesses will display photos and artefacts from the period and the staff of each business will also dress in 19th century costume.

The streets will be closed off to any traffic, with the exception of ponies and traps.

The event will host pop-up history talks, pipe bands, and children’s games of the time.

In March 1863, O’Donovan Rossa, the great Irish patriot, organised a march through Skibbereen town in support of the Polish uprising against Russia.

As a result, the Polish ambassador will be present at the event, as well as representatives of the Irish government, as this year also marks the centenary of O’Donovan Rossa’s death.

This special event will also mark the opening of the Skibbereen Arts Festival, which will run from July 24th-August 2nd.

The popular festival will offer a variety of music, theatre, film, and kids events and activities, including rock ‘n’ roll camps for kids, kayaking by starlight, 4 Plays in a Day, James Yorkston and Alasdair Roberts performing at the Abbeystrewry Hall, and much more.