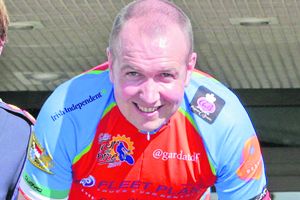 A detective garda from Bantry has been hailed a hero after rescuing an elderly woman from a fire in Dublin last week.

Father-of-one Det Diarmuid O’Donovan, 37, from Kevin St Garda Station, was praised for his bravery in rescuing Kathleen Griffin (72) from her flat at the Iveagh Trust complex in Dublin city centre.

Diarmuid, who grew up in Slip Park in Bantry, is the godson of West Cork senator, Denis O’Donovan, who said his nephew is a very unassuming man.

‘He loves his work as a garda and I’m delighted for him, and also that he wasn’t injured. His late father Jerry would have been very proud of him, as are his family and this is, according to Diarmuid himself, just something he does in his line of work, said Sen O’Donovan.

Diarmuid and his colleague, Sgt James O’Brien, were driving into Kevin Street when they noticed smoke billowing from a flat across the road on Saturday afternoon around 4pm. They rushed to the scene and managed to get into the apartment to find Kathleen lying on a couch in the sitting room.

They helped her out to the balcony until Dublin Fire Brigade arrived. Kathleen was taken to hospital and was treated for smoke inhalation and burns to her face and legs. Both gardai were also hospitalised suffering from smoke inhalation, while Sgt O’Brien suffered cuts and lacerations to his hands. They were later released from hospital and both are recovering.