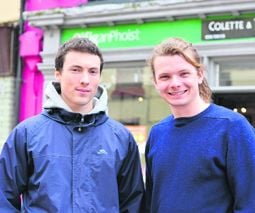 THE organisers of a music event that was scheduled to have taken place on an island off Schull this weekend say they are disappointed that it is not going ahead.

The Schull island event organisers met with gardai on Wednesday in the hope of reassuring them that the event they were planning was not a ‘rave’, but a ‘cultural gathering.’

Maurice Bryson, and Charles Field – whose family own Leighillaun Island off Gunpoint – (a tiny island that is accessible on foot at low tide) told The Southern Star: ‘It would be a misinterpretation of what we are trying to do, to call it a rave.’

But a garda superintendent and sergeant informed the event organisers this week that they were not in possession of a dance licence, so the event could not go ahead.

‘We are disappointed but we understand completely,’ said Mr Bryson. ‘It is the law. We would have applied for the dance licence if we had known. It is disappointing that it is not going ahead on Saturday, but maybe it will happen in the future.’

Mr Bryson said he accepted that the wrong impression had gone out on Facebook because a website – that they are not associated with – indicated that 2,000 people had been invited to attend the event on Saturday, June 6th and that 250 people had accepted.

Mr Bryson clarified the situation saying it was never meant to be a massive event. Before they met with gardai on Wednesday they had sold 49 tickets (which were priced at around €30) and they were hoping that 70 would attend.

He said the event was planned as a ticket-only event, which meant that guests could only gain entry if they bought their ticket online and in advance. It was not, he said, a case of being able to buy a ticket ‘at the door’.

Mr Bryson told The Southern Star: ‘We have been planning this event for months,’ a reference to the fact that he and Charles Field run ‘Moodroom’ events from St Andrew’s university, where they will be graduating, respectively, with a marine biology and theoretical physics degree at the end of the month.

‘Charles’s family own the island and we thought it would be a good venue for a small music event. We only invited a handful of people,’ said Mr Bryson, who indicated that the number of attendees would have been capped at 150 for insurance purposes.

Mr Bryson said they went through all the usual formalities, including contacting a County Council official and giving them, as they were requested to do, an event management plan, their insurance documentation, as well as a risk assessment. He said it was ‘a shame’ that they were not made aware of the need for a dance licence because if they had known, they would have applied for one, but now they were out of time.

‘We had got full public liability insurance to cover the event,’ said Mr Bryson, who explained that Moodroom events are essentially for friends and are never boisterous or rowdy.

He said: ‘We had intended serving local food, featuring local bands, and had booked an Irish traditional performer who was going to fly in from Berlin.’

Mr Bryson indicated that the event was never designed to be a money making venture. ‘We wanted to run it just for the pleasure of having a live music event. In fact, we would have been running it at a loss.’

Mr Bryson said: ‘We did try our best to speak to the local residents, people who would be affected by the sound to make them aware of the event.’

And, in March, he said he did have some luck in speaking with people who have holiday homes in the area. ‘We never wanted to upset anyone,’ he added.