Some of the new Fastnet Trails signposts in Ballydehob 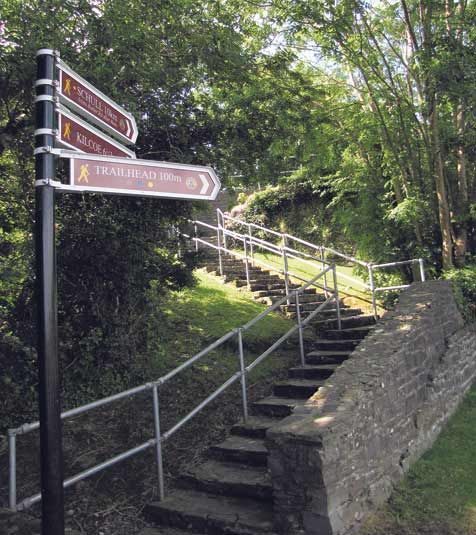 Some of the new Fastnet Trails signposts in Ballydehob.

A West Cork walking group has launched their self-sustaining tourism project near Kilcoe Church with the unveiling of a series of walks aimed to promote local natural assets.

The Fastnet Trails is a package of scenic walks that lie close to the Roaring Water Bay and covers a distance of 80 km from Lisheen to Schull.

The aim of the Fastnet Trails committee, according to member Eugene McSweeney, has been to increase awareness of natural and built heritage by packaging what the area has to offer in a pleasing, easily accessible recreational activity. There are eight designated walks (6 looped and 2 linear) that start from four different trail heads in Lisheen, Kilcoe, Ballydehob and Schull. Each trail head displays a map board with suggested routes and estimated walking times.

The launch event was well attended by walking enthusiasts and local dignitaries including former TD Jim O’Keeffe who officially unveiled the Kilcoe map board.

O’Keeffe complimented the Fastnet Trails committee for pulling groups together to work toward one common good. ‘I think that the future of communities, rural communities in particular, is communal effort. This is a benefit to your community, to West Cork and to the country, to whom you are an example’

The Fastnet Trails initiative took two years to organise and €15,000 to implement. McSweeney thanked the many financial and practical supporters who helped make the project happen.

Included were Cork County Council, the Gwendoline Harold-Barry Trust, the Department of Environment, the community councils of Aughadown, Ballydehob and Schull, the West Cork Development Partnership and David Hayward, who designed their brochures.

Special thanks went to Fastnet Trails chairperson Brigid O’Brien for ‘her enthusiasm and perseverance’ that kept the group going.

The crowd then walked to the Roaring Water Pier and the old Kilcoe Church. Father Paddy Hickey, originally of Skeaghanore, and author of the book Famine in West Cork gave brief historical talks along the way.

There are plans to add more information plates along the walks and it is believed that a group in Schull will continue work to extend the trail further west.