Australian Steven Capilli pictured with fiancée Elaine Fitzpatrick from Reenascreena on Inchydoney Beach on Monday morning where he made a very public marriage proposal to her.

STEVEN Capilli certainly put a bit of thought into how he would propose to Reenascreena native Elaine Fitzpatrick.

The couple who currently live in London found themselves going viral in recent days after Australian Steven got Matthew Hart and his West Cork Sand Circle team to design a marriage proposal on the stunning Inchydoney beach on Monday morning.

Steven’s proposal made the headlines on the ‘I Love Clonakilty’ Facebook page and the happy couple also spoke to c103 following his wedding proposal.

‘Elaine was home for the weekend visiting her family and I snuck in under the radar without her knowing so I could set this up with Matthew. She had shown me pictures on Facebook of the amazing sand circles that the group had made on the beach before and I thought it would be a great idea to propose to her using a sand design,’ Steven told The Southern Star.

‘She was shocked that I had turned up, but I was keeping a low profile to make sure this worked.

‘Matthew was brilliant and he came up with an amazing pattern that was something different. It didn’t take him long to do it and what was even better was that it was a stunning day.’

Once Matthew let Steven know that the sand circle was complete, the couple went for a walk on the cliff top and it was then that Elaine saw the marriage proposal. 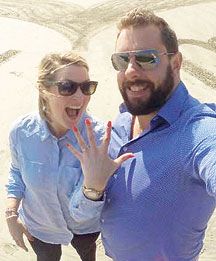 ‘It literally hit her on the face and she did get the shock of her life and she said yes.

‘It was only when we went down on the beach that we realised how large the design was.’

The happy couple now plans to get married next summer in West Cork.

The West Cork Sand Circle Group led by Matthew Hart has been designing intricate and innovative sand circles on Inchydoney Beach for the past few years.

They have recently branched out to sell posters and calendars of their designs and they have over 900 members currently on their Facebook page.