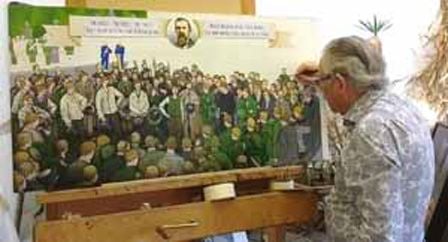 THE seventh Skibbereen Arts Festival pays homage to West Cork – best described as one of the most beautiful art galleries on the planet.

The unique '4 Plays in A Day' returns with productions including Donal O’Kelly's Catalpa,

and an exceptional play about the Israeli-Palestinian conflict, 'Bassam'.

The art of poetry and spoken word features heavily, with appearances by Gabriel Rosenstock,

A mini film festival will show a series of beautiful and thought-provoking films from around the world, including the 1930 Russian masterpiece 'Earth' with live musical accompaniment, an outdoor screening of Italian favourite 'Cinema Paradiso', 2015 Oscar-winning Irish animated film 'Song of the Sea' and documentaries on two of the giants of Irish history – Padraig Pearse and WB Yeats.

Skibbereen itself becomes a gallery for the week, with the work of over 50 artists on display. Highlights include Umha Aois, an international archeology and sculpture symposium that wll produce bronze sculptures in the walled garden of Liss Ard Estate, a gathering of some of the world's leading practitioners of artists' books for an exciting focus on Book Art, and an art trail following the path of the lIen River that will be launched by Ireland's best known living artist, Robert Ballagh.

The programme also features some stunning nature and history walks, talks and discussions, and a plethora of interesting and educational workshops for all ages plus there's a chance to see a brand new show, Café by integrated dance company, Croi Glann.

The festival opens with a very special event to mark the centenary of the death of Jeremiah O'Donovan Rossa. On Friday 24th July Skibbereen will go back in time to the 19th century with a spectacular street parade to commemorate the life and times of one of the town's most famous sons!

The ethos of the remarkable festival is 'inclusion and accessibility' so the organisers say everything is very reasonably priced, with many free events and many opportunities to view or to take part.