Pictured at the launch of a new marketing plan for the Beara-Breifne Way were - from left - Seamus Coffey, Jim O'Sullivan, The Beara Way, West Cork; Matt Ryan, The Ormond Way, North Tipperary; Minister Alan Kelly and Michael Parsons of the Heritage Counci 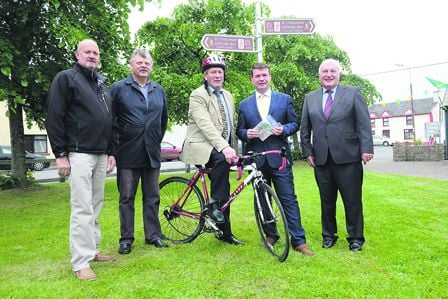 Pictured at the launch of a new marketing plan for the Beara-Breifne Way were - from left - Seamus Coffey, Jim O’Sullivan, The Beara Way, West Cork; Matt Ryan, The Ormond Way, North Tipperary; Minister Alan Kelly and Michael Parsons of the Heritage Counci

THE Beara-Breifne Way is to be marketed as Ireland’s answer to ‘The Camino’ and is expected to do for walkers what the Wild Atlantic Way did for motorists.

Harriet Emerson of Adjust in Timoleague devised the new five-year marking iniative and it was launched recently by the Minister for the Environment, Alan Kelly.

She explained that the marketing plan will ‘tie together all the different sections of the historic route that stretches from Dursey Island, on the tip of the Beara Peninsula, through ten counties, to Breifne in Leitrim.’

Harriet Emerson described the Beara-Briefne Way as ‘a unique community initiative: There has never been a project as extensive as this in the country, so the communities need to come together to agree how they are going to promote themselves and attract overseas visitors.

‘Over the next five-years,’ she added, ‘the initiative will promote events that are happening along the way.

E-marketing will also be a big feature of the marketing campaign because social media is an incredibly effective marketing tool.’

Harriet Emerson described the historic route taken by the Cork chieftain O’Sullivan Beare and his followers, as they fled Elizabethan forces following the Battle of Kinsale, as ‘the heart of Ireland – it will bring tourists to place that have never been seen.

‘It will focus on all the myths and legends, all of the clan histories and the extraordinary journey over 400 years ago of O’Sullivan Beare fleeing from the very south west to Breifne in County Leitrim, and how he started out with over 2,000 but arrived with just 35 followers.’

Because the Beara-Briefne Way has the distinction of being the longest walking and cycling route in Ireland, Jim O’Sullivan, chairman of the Beara-Breifne Committee, said he believe it will have the same appeal as ‘The Camino’ and the Wild Atlantic Way.

‘The Wild Atlantic Way, which has captured the imagination of tourists the world over, is primarily geared towards motorists because it follows a driving route from Donegal to the south of the country, but the Beara-Breifne Way is geared towards walking enthusiasts and cyclists and offers a different perspective completely.’

There are two sections of the route in Roscommon and Sligo still to complete, as well as a small section in north Tipperary, but Jim O’Sullivan said: ‘The route will be fully open by the end of next year.

‘Our next objective will be to open a full-time office in a location that has yet to be determined to fully promote the trail; and our long-term objective will be to interlink the Beara-Breifne Way with routes in Northern Ireland, thereby creating the first All-Ireland route.’