Jason van der Velde of West Cork Rapid Response (WCRR) with Derry, James, Ronan and Nora Scannell. The family is holding a coffee morning in aid of WCRR on August 8. 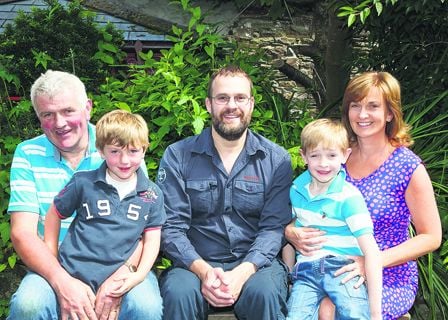 Jason van der Velde of West Cork Rapid Response (WCRR) with Derry, James, Ronan and Nora Scannell. The family is holding a coffee morning in aid of WCRR on August 8.

THE first day of summer this year is unfortunately a day Derry and Nora Scannell and their family will never forget – for all the wrong reasons.

On Friday May 1st, one of their twin sons, Ronan, (6) had an accident when he was knocked down and rolled over by a school bus near Dunmanway Swimming Pool.

Luckily, Ronan has made a great recovery from his accident but The Scannells wanted to thank the emergency services for their Trojan work attending to Ronan when the accident happened.

‘We are so fortunate that Ronan was one of the lucky ones and he is making a marvelous recovery,’ said Nora, speaking to The Southern Star. ‘But it is a time we will never forget. What started as a normal Friday became one of our worse nightmares. We were going swimming and there was a line of parked cars facing in towards the pool and I was driving out from work in MICC. Ronan thought these were the two lanes of traffic and bolted towards me right in the path of the oncoming school bus. I remember the smile on his face and then nothing.’

‘All of this happened within 10 seconds and I can’t put in words what was going through my mind then. I just started screaming. No words can describe this other than your worst nightmare unfolding before your eyes. Your mind thinks the worst and your whole world stops,’ recalled Nora.

‘Our first thoughts were with our child, but then we thought of the poor bus driver and our hearts went out to him, as there was nothing he could do. There wasn’t even time for him to react. He has been great and has been in touch with us regularly enquiring on Ronan’s progress’.

Derry Scannell was the first to attend to Ronan and he was quickly removed to the Primary Health Centre in the town. The Scannells will be eternally grateful to Pauline Farr, a palliative care nurse too for all her assistance as she ran from her own car and stayed with Ronan assisting the doctors all the time.

Ronan was seen immediately by Dr Tom O’ Donnell and Des Grennan, an advanced paramedic. Dr Jason van der Velde of the Rapid Response then arrived and together they worked on Ronan for about two hours. The bad weather prevented a helicopter from landing in Dunmanway so Ronan was taken by ambulance to Cork University Hospital.

‘Ronan then went into the care of the waiting team to further assess his injuries. The relief we felt once we knew that his injuries weren’t life threatening is indescribable. We don’t know how to thank so many people for their outstanding work attending to our little boy. We have supported the West Cork Rapid Response from the start, but never imagined that we would need it first hand. Jason is phenomenal and the calmness and control that exudes from him is amazing.’

‘Ronan is brilliant now and he even attended Cúl Camp recently with his twin brother James, who was delighted to have his buddy home and well again. They are both going into 1st class in Kilmeen National School and his teachers and the pupils were fantastic sending him cards and presents during his stay in CUH.

‘West Cork Rapid Response is life saving and we are blessed to have this service in our midst but it needs to be retained.’

The Coffee Day is at Bealad Community Centre on Saturday August 8th, 11am-5pm.