New figures released this week show that both Bantry and Bandon/Kinsale have much higher than average 14-day incidence rates, but the Kinsale figure is likely to be due to its proximity to Cork city.

ADMISSIONS to the intensive care unit at Bantry General Hospital (BGH) may only be offered to those with the best chance of survival, according to a consultant.

The hospital has suspended all inpatient, day case and outpatient services,  due to the rapid increase in the number of patients with confirmed Covid-19 being admitted.

The Bantry area has emerged this week as a major Covid blackspot, with 359 confirmed cases in the fortnight up to January 11th. That gives the electoral area an incident rate of 1,601 per 100,000 population, significantly higher than the national average of 1,410.3.

While the Bandon-Kinsale area also has a high incidence rate (2,012), it is believed that may be attributable to its proximity to the city areas, which are also showing high rates 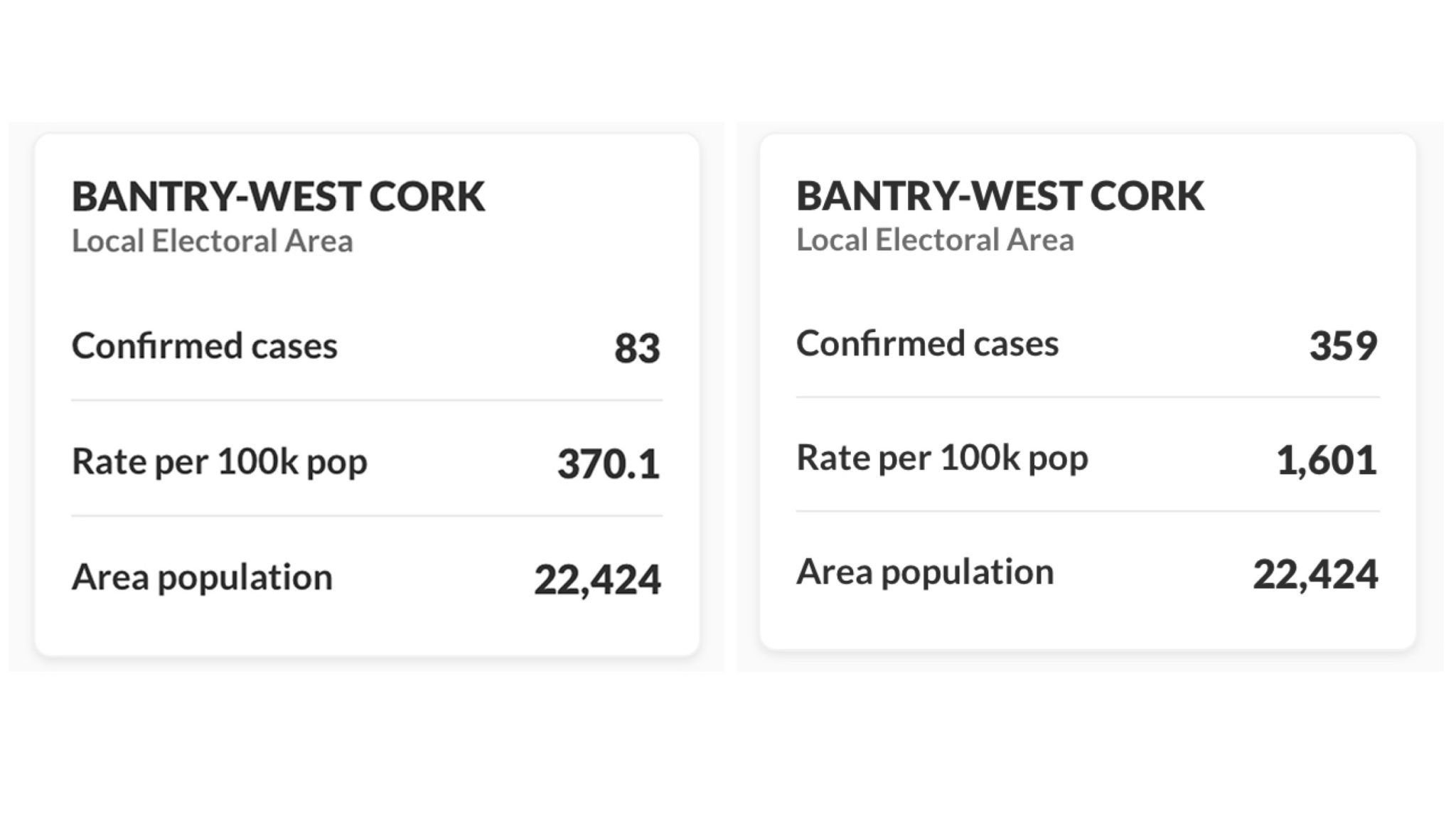 Above: Figures show the high jump in case numbers in Bantry over a two-week period (Left: two weeks up to Dec 28th, right: two weeks to Jan 11th).

However, the other four electoral areas in West Cork all recorded rates this week which are close to, or lower than, the national average – Carrigaline (1,468); Macroom (928) and Skibbereen (1,427).

The Bantry case figure is also a significant jump from the previous number of cases a week previous (201) and a week before that again (83).

A number of shops in the town, and the AIB bank, were closed last week, due to Covid outbreaks in the area.

Cases of Covid-19 have also been confirmed in the hospital, although the HSE has not said whether they relate to patients or staff.

The HSE has reassured the public that patient and staff care is the ‘main priority.’ It says the hospital has the capability to transfer patients needing ICU treatment to ‘appropriate sites’.

It is believed a transfer was made to CUH this week.

Dr Brian Carey, consultant physician at BGH, wrote to medics in the Bantry area this week to tell them of the difficult decisions they may face in choosing patients for ICU who are most likely to survive.

‘We strongly advise admission avoidance for all patients unless absolutely necessary,’ he said.

Chairman of the Friends of Bantry General Hospital, Cllr Declan Hurley said: ‘No doctor wants to be put in a position where he or she has to play God. Every hospital is in the same situation. This is not just a Bantry problem. The bigger hospitals are also under immense pressure.’

A hospital source told The Southern Star: ‘The hospital is currently coping with demand. However, in a fast changing environment, there would be some concerns about the ability to deal with the workload.’

FF TD Christopher O’Sullivan said: ‘We had been doing so well in West Cork in suppressing the virus, but this is further proof we really need to take every precaution necessary. What’s happening in Bantry underlines this. It isn’t just Bantry, it’s happening right throughout West Cork. We need to stay at home.’

No masking the anger over Bantry market attracting people to town

STRENUOUS calls have been made to close Bantry Market following the serious spike in Covid numbers in the area.

There are also concerns that many people are not wearing masks while attending the market.

Gardai have, however, confirmed that such markets are classed as ‘essential retail outlets’ during the current restrictions.

However, Cork County Council said it was aware of ‘an instance of non-essential goods being traded’ at Bantry Market last Friday which they have referred to the gardaí.

Concerned citizen Kathryn O’Reilly, who had a relative recently die from Covid-19, is of the opinion ‘the market should be cancelled because it is the cause of gatherings and there are a lot of people wearing no masks around the town.’

She said the sale of items such as high-vis jackets and power tools are not essential at this time. ‘They can all be bought locally,’ she added.

One man contacted The Southern Star to complain of ‘an anti-mask element in town’ saying some people attended the market and moved through Wolfe Tone Square without wearing masks, at a time when the town is experiencing high levels of infection.

‘The market is encouraging people to move around at a time when people are being told to stay at home,’ he said.

Bantry Garda Supt Ronan Kenneally told The Southern Star the gardaí had received no complaints of anti-maskers attending the market.

‘We have regular patrols out at the market and there were no issues last Friday,’ he said. ‘But we do encourage people to wear masks.’ 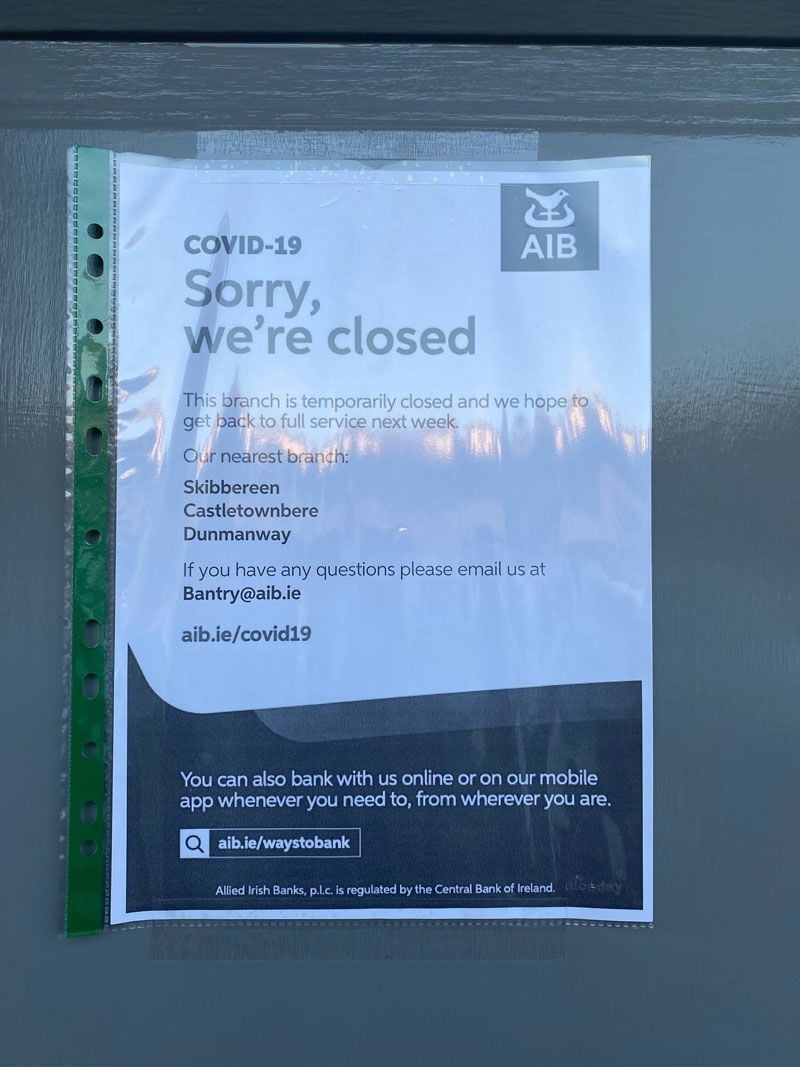 Above: AIB has been affected by the rise in Covid cases in Bantry

Last Friday, Bantry’s AIB was closed due to Covid, although the branch has since reopened with reduced hours. A butcher shop in the town and the Vodafone outlet also posted similar notices explaining why they had closed.

These closures, while the open-air market enjoys brisk business was, according to one local woman, an example of a lack of joined-up thinking on behalf of the health authorities.

Meanwhile, Dave Louks, chairman of the ongoing Saturday Farmers’ Market in Skibbereen said: ‘We have worked closely with the gardaí and the HSE and they are happy with the way we run the market.’

Trader Fingal Ferguson of Gubbeen added: ‘We are very confident in what is happening in Skibbereen.’