At the launch of the app were Minister Alan Kelly, Laura Burke, director general, and EPA inspector Cormac MacGearailt. 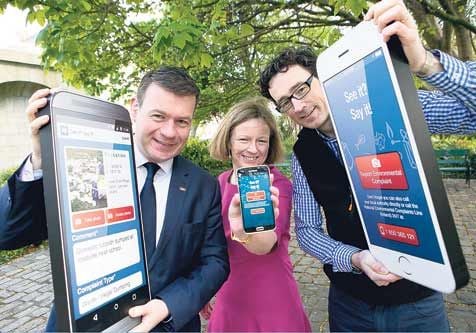 At the launch of the app were Minister Alan Kelly, Laura Burke, director general, and EPA inspector Cormac MacGearailt.

A NEW app designed to highlight and identify pollution and litter issues, has been launched by the Environmental Protection Agency (EPA).

The EPA launched an iPhone version of the App in 2013 and the Android version is now also available. Using the app, a member of the public can take a photograph of the pollution incident, add a quick description and their contact details and send the message with automatic GPS location co-ordinates for follow up by the relevant authority.

The app nicely complements the Southern Star’s recent ‘Keep West Cork Tidy’ campaign to ‘name and shame’ heavily littered areas around the region, in an effort to promote civic pride awareness, ahead of the 2015 tourist season.

The app also complements the existing 24-hour nationwide environmental complaints phoneline on 1850 365 121. People now have the option of reporting issues such as backyard burning, fly-tipping, water pollution, odours and littering, using the app or by phoning the complaints line.

All calls to the environmental complaints phoneline are answered by dedicated staff who pass the reported information to the relevant body for follow-up, be it by a local authority, the gardai or the EPA.

Local authorities are also urging members of the public to make use of the new app and to continue using the National Environmental Complaints Line. This will help local authorities to tackle inappropriate and illegal activities that recklessly endanger public well-being and the environment.