Méabh and Ronan, the Tofu-making couple, supply restaurants including Café Paradiso in Cork and The Church in Skibbereen. (Photo: Andy Gibson)

A West Cork-based duo recently launched an organic tofu business and have been encouraged by the local appetite for plant-based food. Now they’ve been accepted onto SuperValu’s Food Academy too

MÉABH Mooney and Ronan Forde set up their plant-based company Otofu from their home in Kilbrittain last October and said the response throughout the area – and beyond – has so far been incredible.

Méabh, originally from Kerry, studied and then worked as a fashion designer for 15 years in London, Sydney and Dublin.

One of the companies she worked for had an office based in Shanghai, so she worked there on and off over a period of three years. Coupled with nine years living in Sydney, Australia, where plant-based food was the norm, this cultural combination led to an ongoing appreciation of healthy, plant-based, particularly Asian, food.

Ronan, originally from Clare, has a degree in IT and a masters in community development and has spent time working in Cork, Guatemala and Liberia. He has also worked for almost 15 years in the Irish food industry, mostly artisan and is now a food production manager.

The couple are parents to Oisín, nearly three, and eight-week-old Culann.

‘Ronan, who has lived in Kilbrittain for years, has always looked for opportunities to start his own business, and my  move to West Cork from Dublin for my maternity leave, followed closely by the pandemic, led to an opportunity to start considering a new career,’ said Méabh.

Tofu, they say, really is a practical solution to a current problem on so many levels.

‘It is plant-based.  It is organic.  It is healthy and nutritious. It’s delicious and so versatile,’ said Méabh. ‘It’s been around forever and it deserves to be eaten more widely in Ireland, especially at the moment with current desires to alleviate climate issues.

‘I do believe in balance, though, and eating a local egg or free range, organic Irish meat to be a good, natural choice over flying avocados from across the globe, especially when the people in the country they come from can’t afford to eat them anymore due to foreign demand.’

Tofu has only three ingredients –  soybeans, water and nigari (a by-product of seasalt) and has a very similar protein content to meat, fish and eggs.

‘Our tofu is made from organic, non-GMO European soybeans – this is as close as soybeans get to West Cork for now!’ explained Méabh. ‘The beans are soaked in water before we grind them into soymilk and okara. The soymilk is then heated in large vats, and a coagulant of nigari (a by-product of making seasalt) is then added which splits the soymilk into curds and whey. The curds are poured into moulds and pressed. The blocks of tofu are then removed, cut and cooled.’

They then add their marinades, vac-pack the tofu, label it and refrigerate it ready for dispatch in the following days.

Standing over the sustainability of their product is really important to them.

‘Soy can be seen as bad environmentally,’ said Méabh. ‘This reputation is mostly due to the large amounts of soy that is grown worldwide as animal feed – over 90%. It has even led to deforestation in parts of South America which is very sad. This is why we only buy organic, non-GMO beans, even though it is more expensive – it really is important to us to be part of a cleaner future, something we believe in and can stand up for  – one manageable step at a time.’

They consulted with Teagasc very early in the research of the business as they had read that soybeans had been grown successfully in the midlands for animal feed. ‘Animal feed soybeans are different to organic grown beans for human consumption so they weren’t an option for us, but it still gives a glimmer of hope for the future.

‘We also know West Cork grower, Nathan King, who is attempting to grow his own soybeans on a larger scale [see panel]. Nathan gave us some seeds last year and we did grow some of our own soybean plants, in our little homemade greenhouse.

‘We only managed to get about three successful plants from 20 seeds, but still it was good to see the process and the beautiful plants produced.’

Highly conscious of reducing waste, they give the okara – which is high in protein and fibre as well as other nutrients – to a local farmer who either feeds it to his bio-digester so that it is turned into energy and fed back to the grid, or he feeds it to his free-range pigs. 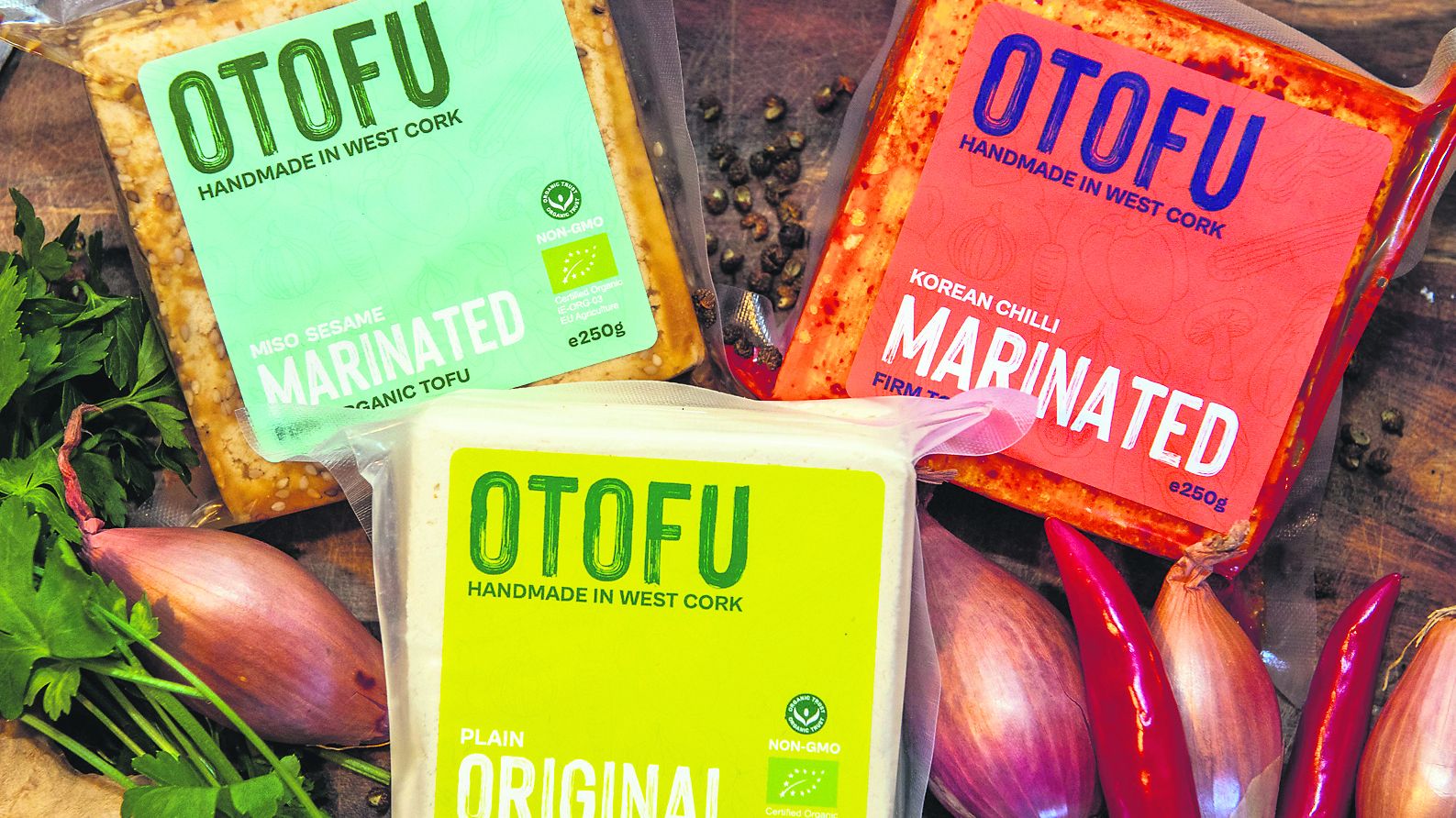 A selection of Tofu products, made in Kilbrittain by Ronan Forde and Méabh Mooney.

‘A nice organic meal for them which he says they love!’ says Ronan.

They currently deliver to West Cork and Cork city and have found great support among most healthfood shops and independent grocers as well as some larger outlets.

‘Café Paradiso in Cork city has been another great customer and we are delighted to be part of their weekly menu. The Church Restaurant in Skibbereen also uses our tofu which is great.

‘We have had quite a bit of interest from stores outside of Cork. We do hope to take on a distributor later in the year when we expand our production capacity – this will allow us to distribute nationally – one step at a time!

‘We just had a little boy in February so we can’t plough on too quickly, though we do plan to keep the momentum going as much as we can!’ said Méabh.

The couple said their Local Enterprise Office was particularly helpful with supports for helping to get off the ground.

‘From the food starter programme to the start your own business course as well as the huge impact the priming grant has had on our business we are so appreciative of their help and guidance,’ says Ronan.

NATHAN King, originally from Ballincollig and living in Ballinascarthy, approached growing soybeans as a Covid project with a view to investigating whether they could be grown here or not.

‘I have done two trials. One in a poly tunnel and one in a field. Obviously to be viable they would need to be grown in a field,’ said Nathan, a chef of 10 years, who studied food science and is now a process technologist.

So far he’s had limited success – but isn’t discouraged.

‘I had a good yield in the tunnel, but only okay in the field. We have two more trials this year and with a new variety as part of that. Only time will tell.’