The West Cork contingent at the Munich Film Festival where their film ‘Happy Hour' won the Best Production award.

HAPPY Hour, a film that was shot on location in West Cork, has won ‘The Best Production Award’ at the Munich Film Festival.

Tanya Flynn of Schull Drama Group and Moritz Muller, the Skibbereen-based location scout manager, were in Munich when the film had its world premiere and won the coveted award.

Tanya told The Southern Star the film was ‘very well received,’ and went down well with the German audience, who expressed a lot of interest in Skibbereen, Baltimore and Tragumna, the locations used in the movie.

This film, as well as a film from Glengarriff, had its Irish premiere at the Galway Film Fleadh on Friday last, July 10th.

The film was written and directed by Moritz’s cousin, Franz Muller, who featured prominently in this year’s Corona Fastnet Short Film Festival in Schull when he showcased another of his movies, Worst Case Scenario.

Happy Hour caused quite a sensation when it was filmed in the locality, especially one memorable session at Baby Hannah’s pub in Skibbereen.

Locals, who got bit parts in the movie, are eagerly looking forward to it going on general release and it is believed that its win at the Munich Film Festival will provide a tourism boost for West Cork. 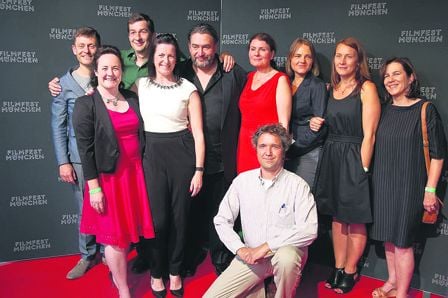 The West Cork contingent at the Munich Film Festival where their film ‘Happy Hour’ won the Best Production award.