Oonagh and Nona at a temple in Nepal 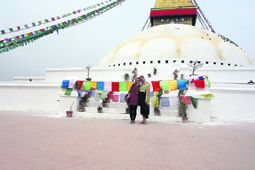 Oonagh and Nona English from Kilcoe at a temple in Nepal.

A MOTHER and daughter who experienced first hand the terror of the earthquakes in Nepal are now home, helping to raise money for those left homeless.

Twenty-year old Oonagh English and her mother, Nona Taylor, who live at Kilcoe near Skibbereen, were studying the Tibetan language and on retreat in a village called Pharping, which is about the size of Ballydehob.

On the day of the first earthquake, April 25th, Oonagh said the students ‘heard something like a lorry going by, but the whole building started to shake so badly that we fell over because we couldn’t stand up.’

Nona, who was on retreat, said she literally had to wait for the frame to match up with the door – the building was moving so much – before she could make her way out of the centre.

‘By the time I got to the stairs,’ she said, ‘it had subsided, but I was terrified and it took me a while to establish if Oonagh was safe and where she was.’

Shortly after they were reunited, they went out with members of the village to other villages to see what was needed.

‘Within days,’ Oonagh said: ‘we established that over 200 homes were completely demolished.’

The mother and daughter are supporting a German fundraising appeal they are familiar with.

With the Monsoon season lasting until the end of the summer, Nona said there is a need to provide temporary accommodation, followed by a more permanent re-building programme for these families.

‘These peoples’ homes have been devastated. We didn’t meet one Nepali who hasn’t been affected by a death. But the courage and love and compassion and the ability they have to share is quite remarkable.