Fiona Field, left, and Helen Collins from A Taste of West Cork Food Festival with County Mayor Cllr John Paul O'Shea at Kalbo's Café at the Uillinn Arts Centre in Skibbereen for the launch of the 12th annual festival. 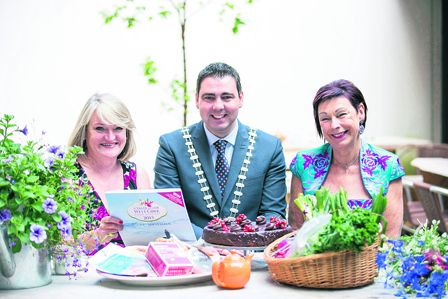 Fiona Field, left, and Helen Collins from A Taste of West Cork Food Festival with County Mayor Cllr John Paul O’Shea at Kalbo’s Café at the Uillinn Arts Centre in Skibbereen for the launch of the 12th annual festival.

THE Taste of West Cork festival will have 32 towns and villages and eight islands taking part this year.

The festival, which runs from September 4th-13th, was launched this week by Minister Simon Coveney at the Uillinn West Cork Arts Centre in Skibbereen.

With the addition this year of events from the Beara Peninsula to Bandon, organisers are hoping to further improve on the large crowds which attended last year.

Using the best of West Cork food produce, fused with international flair, events entitled ‘Tee Off & Taster Teaser’, ‘A Taste of Turkey’, ‘Summer Senses’ and ‘Seafood & Craft Beer Pairings’ or ‘West Cork Cast, Catch & Cook Experience’ will surely tickle the imagination of food lovers, families and those in love with West Cork. Speaking at the launch, Minister Coveney said that West Cork has long held a reputation for excellence in food production and preparation and is recognised as a top foodie destination in its own right and deserves all the accolades it gets.

Everyone is united in their quest to bring business into the area and proudly showcase their products, he added. The festival is part-funded by Cork County Council, Fáilte Ireland, Belling, Fields of Skibbereen, and many other supporting sponsors.