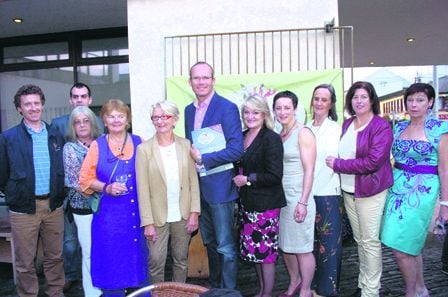 THE Taste of West Cork festival was launched last week at Kalbo’s Café in the Uillinn West Cork Arts Centre in Skibbereen.

Minister Coveney was joined by guests Darina Allen of Ballymaloe House and a host of local business people, participating restaurtant and café owners, and invited guests.

With the addition this year of events from the Beara Peninsula to Bandon, even bigger crowds are expected to attend this year as the festival grows in popularity. With a line-up of almost 140 events, including cookery workshops, dinners and interactive food demos, a sustainable conference, awards ceremony, historical events and farm visits, the festival is aiming to take the title of Ireland’s premier food festival.

Events include a ‘Tee Off & Taster Teaser’, ‘A Taste of Turkey’, ‘Summer Senses’ and ‘Seafood & Craft Beer Pairings’ or a ‘West Cork Cast, Catch & Cook Experience’.

The 20-page programme is now available and the listings are continuously updated on atasteofwestcork.com. From the opening night’s culinary fiesta to the finale at the Sunday Street Market in Skibbereen on September 14th, the organisers have ensured there is something for everyone.

Over 50 Artisan Food Producers in West Cork have been invited to submit an application to the Belling West Cork Artisan Food Awards Committee and a shortlist of finalists will be selected and showcased at the prestigious Belling Awards dinner on Saturday September 12th at Baltimore Yacht Club.

The festival, which is headquartered in Skibbereen, is part funded by Cork County Council, Fáilte Ireland, Belling, Fields of Skibbereen, and many other supporting sponsors from the region and outside - see a full list of supporters on atasteofwestcork.com.