A WEST Cork confectionary producer has become the latest business to be awarded fluoride-free status as part of The National Fluoride Free Towns Project. 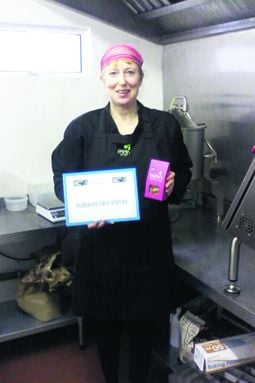 Mella with her fudge, made with fluoride-free water.

A WEST Cork confectionary producer has become the latest business to be awarded fluoride-free status as part of The National Fluoride Free Towns Project.

The award winning Mella’s Fudge, based at Lisavaird near Clonakilty is also celebrating its 10th year in business.

The product is currently stocked in over 70 outlets around the country, supplies Dunnes Stores and SuperValu and also exports to the UK, continental Europe and the US.

‘I’m delighted to be making my artisan fudge with fluoride-free water and proud to be supporting the campaign. We pride ourselves on using the finest, purest ingredients and to this end, using fluoride free water seems like an obvious and logical business move which I’m in no doubt will also benefit sales of our growing product range in Ireland and abroad,’ said Mella McAuley.

This latest fluoride-free business, with national and international sales, joins over a dozen other businesses in Clonakilty and Bantry who installed reverse osmosis water filtration systems in the past year to raise awareness of the issue and to meet customers’ demands.

‘Enforced mandatory water fluoridation has been abandoned by every other European country on health or environmental grounds and current estimates by regulatory authorities in Ireland suggest 40% of the population are experiencing unconstitutional irreversible cosmetic and structural pre eruption damage (fluorosis) to their teeth.’

Many local councils have now passed motions asking for the government to reverse its fluoridation policy, he added.