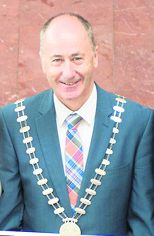 OUTGOING County Mayor Cllr Alan Coleman may be about to resign from the Fianna Fáil party in Cork South West.

Cllr Coleman withdrew his name just hours before the convention because, he claimed, he had received very little support from party headquarters.

‘I’ve served Fianna Fáil well in this constituency and I feel I’ve been treated very poorly. This isn’t the first time that I’ve been treated badly by party headquarters and this present situation is very unpleasant for me at the moment,’ said Cllr Coleman speaking to The Southern Star.

‘I was quite shocked back in January when internal polls by Fianna Fáil were done, and my name did not feature in them. Even if you go back to the local elections last year, the Fianna Fáil headquarters added a candidate to my area, in the next door parish of Tracton, and that was a sign of how they viewed me as such – they were willing to put in another candidate, who eventually withdrew 48 hours before the election.’

Cllr Coleman also said it was ‘clear from an early stage’ that headquarters was not happy about him seeking the nomination for Cork South West.

Cllr Coleman, who has been a very high profile mayor, finishes his 12-month term this Friday, and says that he hasn’t ruled out the possibility of running as an Independent candidate in the future.

Cllr Margaret Murphy O’Mahony was selected as the party’s candidate for the Cork South West constituency after over 400 delegates voted.

‘I’m thrilled as I put a lot of work into it and I’m glad it worked out. The vote was won by 247 to 155. I met most of the delegates and campaigned, and I was relieved and humbled to be selected,’ said Cllr Murphy O’Mahony.

‘I will leave no stone unturned, and will do my very best as I feel this seat is traditionally and rightfully ours and I will do my utmost to get it back. It was great for the party to have such a high calibre of candidates nominated, and it was ironic that there were two women left after Denis, Patrick and Alan withdrew. I’d like to praise Gillian as well, who is a very strong candidate. I’m very much up for the fight now.’

Party vice-president Timmy Dooley TD, who chaired the Bantry convention, said it was disappointing that Cllr Coleman had withdrawn from the convention.

‘He would have been given an opportunity to speak if he was there, but he had communicated his decision to withdraw to party headquarters on Saturday. He obviously had his own reasons for withdrawing, but at the end of the day, the organisation on the ground made the decision to pick one candidate,’ he said.