The empty space after the statue disappeared. (Photos: Andy Gibson)

THE grandson of actor Maureen O’Hara has spoken of his family’s disappointment that Cork County Council never reached out to them about the life-size statue made to commemorate their famous grandmother.

The bronze statue of the Hollywood star was erected in Glengarriff village recently, without the prior knowledge of either the locals or Maureen’s family. However, it was removed just 48 hours later, and it is unknown where the statue is now.

Conor Beau Fitzsimons, who had been involved in the first attempt to create a statue for the Hollywood icon, was this week very critical of the Council’s handling of the debacle. ‘No one reached out to us, to even show us, or ask our opinion if there was a likeness to [Maureen]. It’s so disrespectful after what Maureen did for West Cork. They couldn’t get their act together and get it right,’ he told The Southern Star.

‘They certainly dropped the ball and what was worse was that no one even called to say the statue was going up. We only found out about it when the statue was actually taken down.’

Conor believes the family is now owed an apology from the Council and has challenged artists from all over Ireland to step up to the plate and come up with another statue of his iconic grandmother.

‘We want a statue of her to remain in Glengarriff for years to come and I am really disappointed at how it has all turned out.’  This has been the third attempt to make a statue to honour the Dublin-born actress, who settled in Glengarriff in 2005.

Following her death in Idaho in 2015 at the age of 95, locals had planned for a life-size statue to be unveiled on her 100th birthday in August 2020. 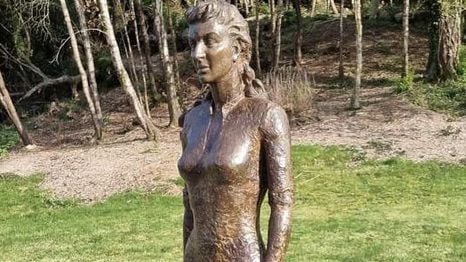 Some commentators said the latest statue erected last Wednesday was not a strong likeness to her.

One person said that a ‘nice bench’ with a plaque remembering the actress, would be more appropriate and far less expensive. Another commentator had assumed it was a famine memorial in the village, while someone else said that it would have been better to open an animal shelter in the actor’s memory.

Cork County Council has remained silent on the saga, despite repeated attempts to get clarification as to why this third statue again bore no resemblance to the actress and why it was removed just two days after being unveiled.

It is not clear whether it was Cork County Council or Innishannon sculptor Don Cronin who ordered the removal of the statue last Friday as the Council has remained tight-lipped in response to requests for a comments.

The initial statue was commissioned by Cork County Council, but was withdrawn by Glengarriff Tourist and Development Association (GTDA) as they felt it didn’t bear a close resemblance to Maureen.

The sculpture was deemed ‘unacceptable’ by the Council and considered not ‘suitable for installation’ and GTDA then commissioned a new artist and a new statue.

However, during the protracted process GTDA abandoned the project and have had no involvement since.

The GTDA returned €26,250, along with the unused bronze statue.

A Council spokesperson previously told The Southern Star that the first attempt to secure a life-size statue involved a contract between GTDA and an artist, but that the latest contract was between the Council and sculptor Don Cronin, to the amount of €33,000.

At the time of going to press, there was no comment available from either Cork County Council or sculptor Don Cronin.