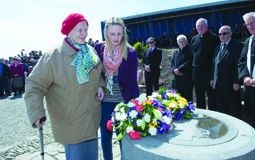 Madge Martin, originally from the Old Head Of Kinsale, lays a wreath at the Lusitania monument. (Photo: Gerard McCarthy)

MADGE Martin, originally from the Old Head of Kinsale, was just one-year-old when the Lusitania sank off the Old Head in 1915.

So it was a poignant occasion for her to be invited to last week’s Lusitania Commemorations to mark the 100th anniversary of the sinking of the ship.

Madge’s daughter, Peggy Boyle from Bandon, said it was a lovely touch for Madge to be invited to the event by the organising committee.

‘My mother was born on April 17th 1914 and she only recently celebrated her 101st birthday. She lives in Newry now, but grew up in the Old Head of Kinsale and has a mobile home there too. She was delighted to be invited to the event and my brother, John, came down with her,’ said Peggy speaking to The Southern Star.

‘She’s in good health overall and even enjoyed a half a pint of Guinness in The Speckled Door after the commemorations. We also went to the Golf Club in the Old Head and she even went in a golf buggy to bring her down to the entrance.’

Peggy also remembers her grandfather telling her about the sinking of the Lusitania.

‘I remember him telling me about the bodies that they found and the clothes and empty boxes washing up on the shore, so it must have been awful for them.’