MOTORISTS using the back roads to access beaches and woods near Ardfield and dodge Level 5 checkpoints are being blamed for the huge amount of rubbish being dumped in the area.

Local GAA club St James’s recently organised a spring clean-up to tackle the litter on their roads, but within 10 days, they were just as bad.

Club members were asked to pick up litter within 1km of their home, or 500 metres either side of their home, and their target was to cover the equivalent of 100km with over 40 members taking part.

‘We collected over 100 bags of rubbish but by last weekend it was like we had never cleaned the place, as the roads and ditches were littered with coffee cups and other rubbish,’ club chairman Niall O’Sullivan told The Southern Star.

‘It’s very disheartening when you see the rubbish littered on the roadsides and I can’t understand it – it’s a slap in the face for the hard work all our members did that weekend.’

Niall said that it used to be rubbish bags being dumped before, but that has changed in recent times with people dumping individual items from their cars.

‘The traffic through Ardfield and surrounding areas has increased tenfold since the latest restrictions, as people are using the backroads to access the beaches like Long Strand and Red Strand, to avoid the checkpoints on the main roads.’

With Easter approaching, Niall and other locals in Ardfield, including Micheál McCarthy who organised the clean-up, are fearful that their roads will become swamped with rubbish again as people opt to travel through the village.

Meanwhile, the owner of Absolute Airsoft Cork has slammed those responsible for dumping and burning two bags of rubbish at a woods that they use for their sport in Béal na Bláth. 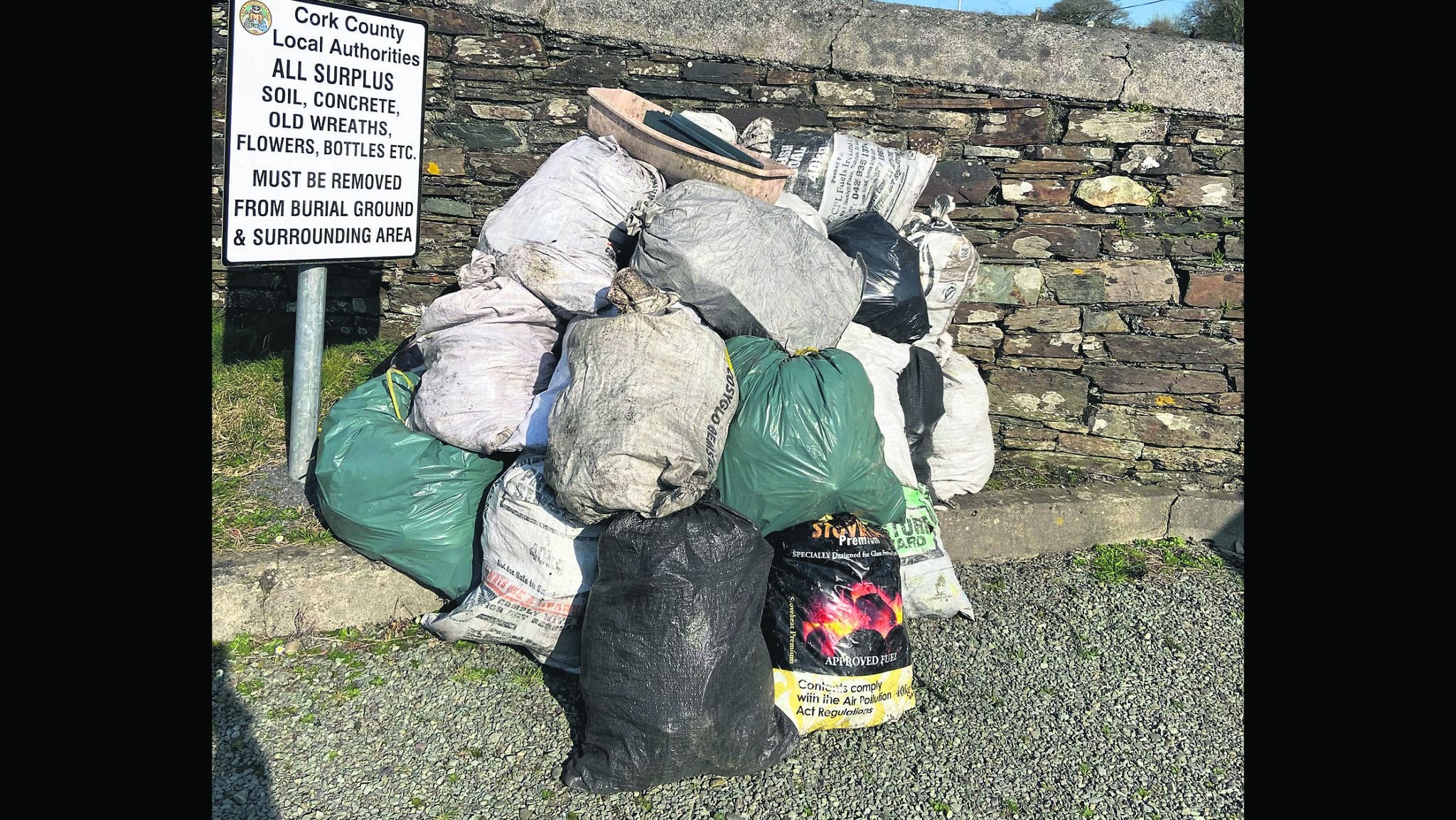 A Glandore man collected 35 bags of rubbish from the local cemetery recently. He said it spanned 10 years and included flower wrappers and discarded plants. He also picks up rubbish in his locality while out walking and said the increase in 'dashboard dining' has resulted in an increase in littering.

Martin Fehilly, who has been using these woods for the sport for the past two years told The Southern Star that incidences of people throwing black bags out of the cars as they pass the woods, is a common occurence.

‘But this is the first time someone has actually come inside and tried to burn the rubbish. Fortunately, Coillte have CCTV cameras here so they are passing on the details to the gardaí and they have had several successful prosecutions at another site we used to use in Crossbarry, which was prone to dumping too,’ said Martin.

However, local authorities have already faced difficulties when trying to use CCTV coverage for prosecutions, as last January Waterford City and County Council was reprimanded by the Data Protection Commissioner, for its use of CCTV to monitor littering blackspots.

Meanwhile, another community who took to the roads last weekend for an organised clean-up ended up collecting 45 bags of rubbish and a tyre. Cllr Sean O’Donovan organised a litter pick-up from Crossbarry village to the crossroads at Brinny and was inundated with volunteers who wanted to help.

He thanked all involved including Crossbarry Community Action Group, and has planned a similar clean-up for Bandon this weekend. Locals in nearby Templemartin also held their own local clean-up last Saturday, as have locals on a road near Caheragh outside Skibbereen, thanks to a donation of bags and pickers from the local litter warden.

And in Glandore, a local man collected 35 bags of rubbish from the local cemetery recently. He said it spanned 10 years and included flower wrappers and discarded plants. He also picks up rubbish in his locality while out walking and said the increase in ‘dashboard dining’ has resulted in an increase in littering.