Ann Cronin from Glengarriff and Margaret Warner from Bantry at the talk in the West Cork Hotel. 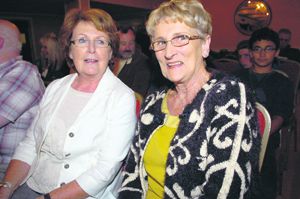 Ann Cronin from Glengarriff and Margaret Warner from Bantry at the talk in the West Cork Hotel.

To mark the 100th anniversary of the tragedy, and as a fundraiser for the Friends of Bantry Hospital, maritime lawyer Michael T Kingston delivered a detailed lecture in the West Cork Hotel recently on the sinking of the Lusitania.

Almost 400 people filled the ballroom to hear the sad tales of the many who perished on the liner, sunk by a German u-boat, and known as the ‘greyhound of the seas’ due to her speed.

Mr Kingston, who is based in London, but originally from Goleen, addressed the issue of risk on the seas, before, during and after the era of the great liners.

What happened Irish emigrants on the ‘coffin ships’ to America in times past, is not totally removed from the challenges facing emigrants in the Mediterranean today, he noted.

He said he was enormously proud to see Irish naval vessels undertaking humanitarian missions today. And he called on international governments to address the crisis in the Mediterranean today.

‘We need to always uphold our duty to fellow human beings and rescue those people,’ he told the audience. And he noted that Skibbereen man Mike Coakley, a member of the Haulbowline-based navy, was part of the first mission to the Med, on board the LE Eithne. He was based in the same harbour that sent out vessels to help the ailing Lusitania, one hundred years before, said Mr Kingston.

‘These are horrific tragedies and on a human level, and are no different to the loss of life on the Lusitania,’ he said.

Mr Kingston, who also asked the audience to recall the hard work of the nurses and doctors and staff at Bantry Hospital, dedicated the talk to the victims of the recent Baltimore tragedy.

As a global expert in risk on the seas, Mr Kingston has worked as a legal advisor with insurer Lloyd’s of London, on a number of major disasters, including the Horizon disaster in the Gulf of Mexico and the Costa Concordia sinking, and, more recently, on reports into shipping routes in the Arctic regions.

During the fascinating lecture, he reflected on the importance of Cork’s ports to the British government, especially in the years before wireless communications.

Crookhaven even had its own Lloyd’s of London agency office. The harbour there was so busy that at one stage, you could walk across the harbour on the boats lined up there, his grandfather Timothy Sheehan, had recalled. Other links with the Lusitania included the fact that she was powered by engines built by the firm of Irishman Charles Parson.

While newspaper reports of the time spoke of two torpedoes, Mr Kingston said it was now more likely that, after the first torpedo struck, a large quantity of aluminium powder on board, may have exploded on contact with water, blowing the hull out of the ship.

This was the noise that may have led observers to mistakenly think there was a second torpedo fired by the u-boat.

He added that while the ship’s sinking was used as a recruitment aid by the British, there’s no doubt but that the British government and owners Cunard line, also had to bear some culpability. And a subsequent report on the sinking, known as the ‘Mersey Report’, was a cover-up, with many important details deliberately left out.

Great research into the sinking and the wreck has been carried out by Bandon man Paddy O’Sullivan, he pointed out, which is documented in Paddy’s book, The Sinking of the Lusitania.

Some fascinating local stories relating to the sinking were also told – including the suggestion that on May 4th the German u-boat surfaced off Fastnet Rock to buy fish from local fisherman ‘Big Jerh’ O’Driscoll from Cape clear.

‘It is thought the u-boat gave Big Jerh payment,’ said the speaker. ‘Big Jerh was sensible enough to hand over the fish, which anyone in their sane mind would do if you had the surface guns of a u-boat pointing towards you and their torpedoes.’

It is also believed that this ‘meeting’ was witnessed by Fastnet Rock lighthouse keepers, and the information was sent to Brow Head signal station. However, there is no record of the information being received by the Admiralty in London.

Another local story is that of John Coughlan who, at 39, boarded the Lusitania to return to Ireland from the US because he was desperately homesick. He was accompanied by his wife Kate O’Neill from Castletownbere, whom he had met in the US. They had with them their three children – Margaret, John and Jeremiah.

Waiting for him at Corran More, near Barleycove, were his father, mother and sister.

They probably looked out from Brow Head and watched the ship pass, suggested Mr Kingston, just as John must have looked out from the ship, looking at his beloved home on Brow Head, as they rounded the coast.

But hours later, instead of a joyous reunion with family and friends, Kate found herself searching Queenstown for her two sons – which she luckily found – and her husband and daughter. Then she had to make the journey to Barleycove, with her daughter in a coffin, and tell John’s parents his body was not recovered. It was never found, in fact.

Many relations of those who lost their life in the tragedy travelled to Skibbereen to hear Michael Kingston’s talk.

Mr Kingston’s links with Lloyd’s meant the company’s famous 1915 Loss Book – officially called the Casualty Book, and containing the entry on the sinking of the Lusitania – was brought over to Skibbereen for the lecture. Eamonn P Egan, the Lloyd’s country manager for Ireland, explained that he had also brought the 1912 book, which detailed the loss of the Titanic, to Belfast for the anniversary in 2012.

Mr Kingston said that over €5,500 had been raised by the event.