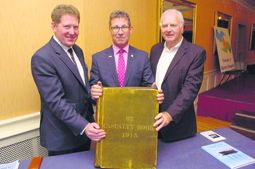 Michael T Kingston, a Lloyd’s Global Maritime Lawyer of the Year, with Eamonn P Egan, Lloyd’s Country Manager Ireland and Northern Ireland, and Michael Henneberry, board of the Friends of Bantry Hospital at the West Cork Hotel in Skibbereen, holding the historic Lloyd’s Loss book which recorded the loss of the Lusitania in 1915.(Photo: Anne Minihane)

OVER 350 packed into the ballroom of the West Cork Hotel on Tuesday night to hear a fascinating talk on the Lusitania and shipping risk, in aid of the Friends of Bantry Hospital.

Goleen native, maritime lawyer Michael T Kingston delivered the talk, which covered the lead-up to the sinking, the incident itself and the aftermath of the tragedy.

Kingston, who works closely with Lloyd’s of London, spoke about the conspiracy theories, the truths and untruths surrounding the ship , which was torpedoed by a German U-boat on May 7, 1915.

He relayed the story of the O’Driscoll family from Brow Head, who lost two members on board the Lusitania, and the ship’s many other incredible links with the area.

There was even a suggestion that the captain of the U-boat was friendly with a local doctor before the war, and mystery still surrounds what happened the German captain after the sinking, with an unauthenticated letter from his wife read out, which suggested he had committed suicide through remorse.

The event was attended by Martin McAviney from the Ulster Council of the GAA, along with senior ESB, CityJet and Lloyd’s of London executives.

Another highlight of the evening was the exhibition of the historic Lloyd’s Loss book from 1915, with the entry denoting the sinking of the ship.

The public formed a long line to view it and see the tragic entry made just hours after the sinking.

‘I hope I don’t lose the Lloyd’s Loss book in Skibbereen,’ joked Eamonn P Egan, Lloyd’s country manager for Ireland and Northern Ireland, who had brought the book over from London, where it is normally kept in a vault.