Marguerite and Michael Crowley watch their cows and newly born calves, above and right, on an iPad. (Photos: Andy Gibson)

West Cork farmers are embracing technology to help survive what can be a gruelling calving season. It also means that a 24/7 on-farm presence is no longer required

A YOUNG West Cork man who managed a dairy farm in New Zealand was able to alert his family back home that a cow was calving.

The crucial intervention by Brendan Crowley was thanks to a new calving camera app which he and his family have described as a ‘game changer’, especially at this busy time of year.

Up until last week Brendan worked as an agricultural contractor and managed a 600-cow dairy farm in Te Awamutu in New Zealand.

His parents Marguerite and Michael run a dairy farm at Bauravilla, Skibbereen. There was an 18,000km distance between the two, but that was irrelevant thanks to the Hik-Connect app.

‘Up until this year we only had a fixed camera in our calving boxes so we still had to go out five or six times throughout the night and look through the cowshed,’ explains Brendan.

‘I would call my parents every second week or so from New Zealand for a catch-up and mum was saying that they had the new app on their phones to look into the calving/cubicle shed. They gave me the login details because the day here is the night at home, and calving 175 cows is pretty intense in such a short period of time.’

Being such a distance apart, he was a bit sceptical initially and never expected it to be so effective, but he was pleasantly surprised.

Brendan usually rose at 6.30am and got home at midnight, so throughout the day he’d check the camera 19-20 times to check for anything looking to calve. He would contact his family on Snapchat to tip them off if anything was happening.

‘It just gave my parents a chance to get a night’s sleep which, before getting this app, was non-existent. If I detected a cow that looked like it was  going to calve I’d ring one of my brothers or dad and they’d get the cow to the calving box.’

That’s exactly what happened recently when he contacted the family at 4am Irish time, (5pm his time), to let them know there was something stirring in the ‘maternity ward.’

Michael or his twin sons typically check the sheds last thing at night, and Marguerite sets her alarm to check the cameras on her phone at 3am, so they were grateful to their son for the tip-off.

The app and cameras, which rotate left and right, cost just over €1,000 but she says it has been well worth it.

‘It has definitely helped save some calves, and cows from going down. And we like to milk them within 30 minutes of calving, so it helps all of that. Some prefer to calve in peace and feed away themselves but it means we can just keep an eye on things,’ she said.

Jerome O’Mahony, in Drimoleague is enjoying his second calving season with the benefit of a camera app.

Jerome uses HiSee technology and says the freedom it affords him is fantastic.

‘It allows me to get out for a swim from time to time, when I’d otherwise have to hang around at home in case a cow calved, or get a neighbour to call and check on things. It really gives top class supervision and flexibility.

‘The ability to zoom in is great and the cameras give incredible detail. You can even clearly read the ear tag on a cow.

‘You can see if a calf is being presented properly and 98% of the time that is the case, and you can let things take their course.’

Brendan described the technology as a ‘huge game changer’ with 360 degree camera rotation.

‘With me connected from NZ, everyone at home got to rest and not get too burnt out. It’s crazy how far technology has come in the last 10 years. From the other side of the world, I could see live what our cows were doing – and if anyone was slacking off work by hiding in the shed!’ 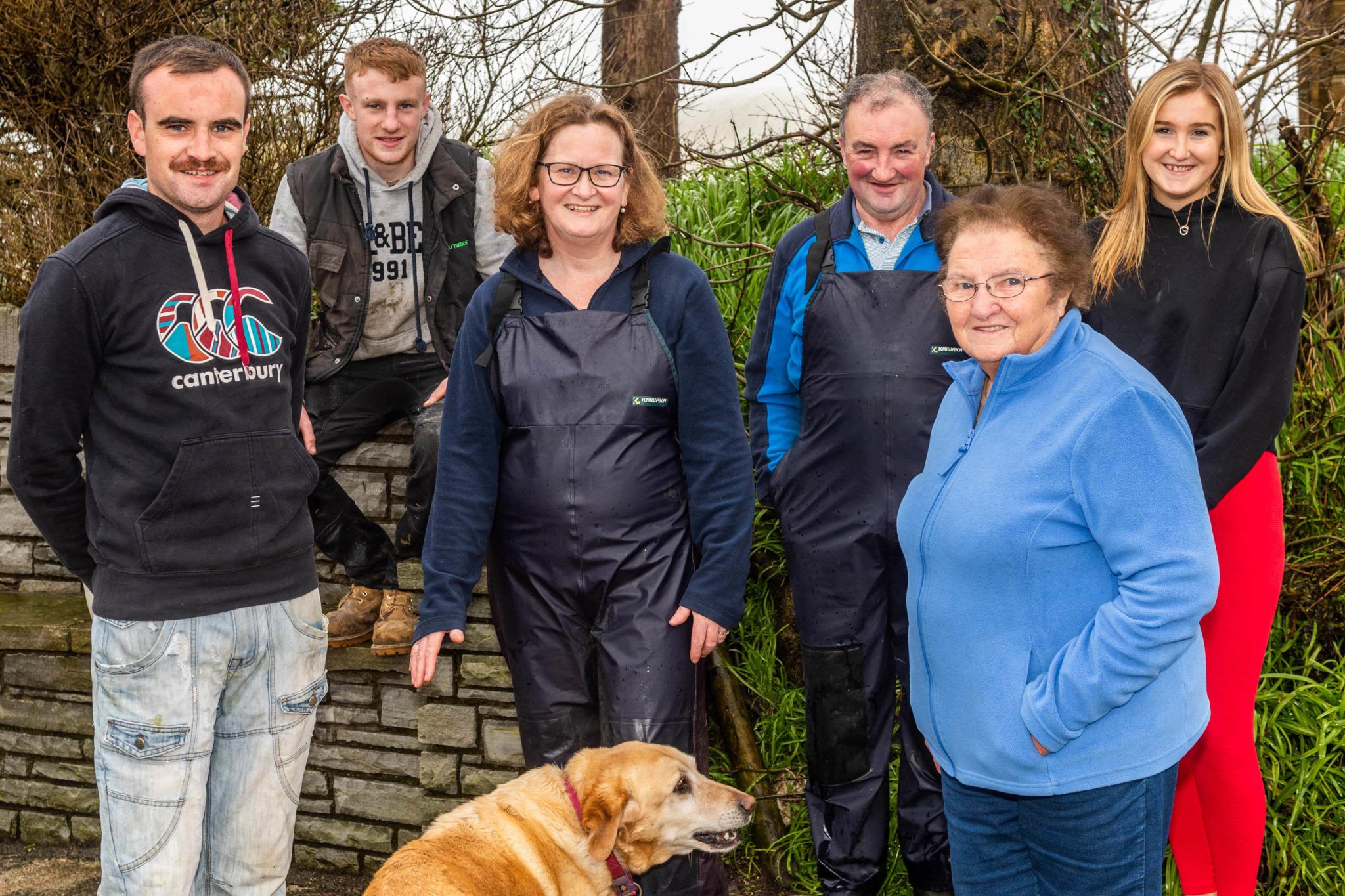 Brendan (far left) is delighted to be home with his family, Colm, Marguerite, Michael, ‘Nan’ (Margaret) and Michelle, along with dog ‘Sandy.’ (Photo: Andy Gibson)

THE tech-savvy Crowley family nearly ‘broke’ the internet last week when they shared their reunion with Brendan when he arrived home unannounced from New Zealand.

All the emotions were captured for TikTok by his sister Michelle, (21) who works in CoAction in Skibbereen. The video was later shared by mum Marguerite on Twitter.

Brendan hadn’t been home for four years, and with the help of Michelle and sister Aisling (23), he caught his parents off guard when he arrived in home last Tuesday evening.

‘We were totally stunned to see him when we came up from the yard from milking,’ said Marguerite. ‘We couldn’t believe it.’

She hadn’t suspected a thing as Aisling said she was going to a Rag Week event in Tralee, and Michelle said she was working a double shift.

‘There is usually a Snapchat message from Brendan when we get up, and we didn’t get any that morning, so I was wondering if he was ok, but I had no idea what was up,’ said Marguerite who was even more pleased to discover he’s home for good after a six-year stint in New Zealand.