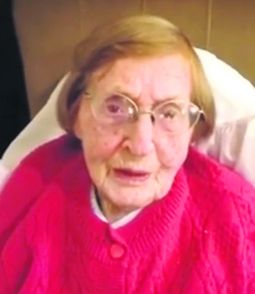 YOU’RE never too old to go viral as 101-year-old Kitty Cotter from Monarone in Bandon has shown this week.

A video of her explaining why she will vote ‘yes’ in next month’s Marriage Equality Referendum, shot by her grand-daughter, Ca, has exploded across social media platforms since it appeared online.

Ca O’Donoghue said she and her family have been overwhelmed by the reaction to the video, which she posted on her Facebook page.

‘I guess a lot of people are thinking that the elderly are going to vote ‘no’, but my grandmother is very open-minded, and is also a devout Catholic, so I decided to put it up on my Facebook page,’ Ca told The Southern Star.

‘I had no idea that it would go viral, as I has only tagged my family on it, but it got shared and suddenly it took off. We told her about the reaction to the video and the wonderful comments she has received from people from home and abroad.’

In the video Kitty, a former schoolteacher, says ‘I am 101 years old. I believe in the equal rights for all our citizens. Therefore, I will be voting ‘yes’ in the coming referendum.’

Ca plans to accompany Kitty to the polling station on Friday May 22nd to cast their votes.

Kitty’s daughter, Mary O’Donoghue, also said she was thrilled with the reaction to the video and that her mother is a very broad-minded woman.