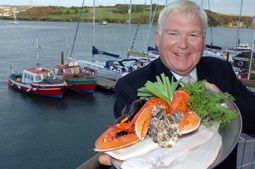 THE town of Kinsale was in shock yesterday as news of the death of former RTÉ broadcaster Derek Davis filtered through.

The effervescent broadcaster was born in Co Down but had a strong association with Kinsale, due to his promotion of locally-sourced food.

‘He recently attended our All-Ireland Chowder Festival and was MC at an event on April 19th. At it, he spoke of his 30-year association with Kinsale and, in one of our online videos, he joked about being “a survivor” of umpteen Kinsale Gourmet Festivals,’ she recalled.

Maria said Derek, who turned 67 just two weeks ago, ‘loved good food, good wine and good company. He was a great man, well educated and could talk to anyone about anything.’

Minister for Marine Simon Coveney also expressed his sadness at the passing of Derek Davis, saying: ‘Derek was a big personality, a passionate and talented communicator, on both food and marine issues. His love for the sea was so evident whenever I met him. Derek was a much-loved figure in so many Irish homes for the connections he created over a lifetime of broadcasting. He will be missed by so many. I would like to offer my condolences to his family and many friends.’