A West Cork-born monk, who runs an organisation which is one of the biggest providers of hot meals for homeless people in Dublin, is to be conferred with the Freedom of the City later this month. 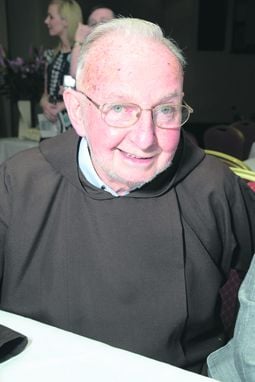 A WEST Cork-born monk, who runs an organisation which is one of the biggest providers of hot meals for homeless people in Dublin, is to be conferred with the Freedom of the City later this month.

Brother Kevin Crowley, who opened the Capuchin Day Centre on the capital’s Bow Street in 1969, is a native of Kilcolman in West Cork.

Along with well-known soccer pundit John Giles, Brother Crowley, who will shortly celebrate his 80th birthday, will be conferred with the Freedom of the City of Dublin on February 28th next.

‘I am very pleased in the sense that this is a recognition for the homeless people and the underprivileged of the city, as well as to our great staff, our volunteers and our benefactors without whom we could not keep this lifeline in operation,’ he said.

‘It’s prayer as well as money that keeps this place going; without the spirituality which is part of the ethos of this centre, we wouldn’t survive.’

However, Brother Crowley warned that the recession is not ending – from what he can see, it’s getting worse.

At one point the Capuchin Day Centre in Dublin was providing 400 food parcels each week to people in need – just last week that figure rose to 1,900, he said.

‘As far as we’re concerned, we’re hearing the analysts saying the recession’s coming to an end, but from what we see, it’s getting worse.’ The number of meals being provided on a daily basis has risen to 800-850.

‘In the morning we’d have up to 300 for breakfast, and in the afternoon up to 550 for dinner. We used to give out 400 food parcels a week on a Wednesday, but last Wednesday we had 1900 people in for them.

‘More people with children are looking for help. These people go to a hotel to sleep and get their food from us.

‘It’s a crying shame to be bringing little children into a hotel room with no cooking facilities.

Br Crowley added that there is a worrying increase in the amount of drug abuse and drug-fuelled violence encountered by staff at the centre.

Running the centre costs €2.3m of which €450,000 is provided by the government – the rest he says, comes from generous benefactors.

‘We get tremendous support from the local gardai. For example, Mountjoy Garda Station holds an annual fundraiser for us.’