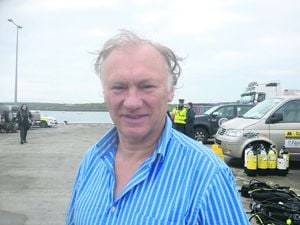 FOR the first time ever, Baltimore RNLI found themselves in a situation where the medical evacuation of a 15-year-old girl with suspected appendicitis from Cape Clear Island had to be delayed by ten minutes because, by law, she had to be accompanied by a parent or a guardian.

Coxswain, Kieran Cotter, confirmed that he and his crew – which included Jerry Smith, mechanic, Pat Collins, Micheal Cottrell, Sean McCarthy, Don O’Donovan and Colin Whooley – launched at 23.45pm on Saturday night and arrived in Cape Clear 20 minutes later. However, they had to wait ten minutes to allow time for a nurse and a representative of one of the island’s Irish colleges to accompany the girl on the lifeboat to Baltimore.

When the Baltimore RNLI arrived in Baltimore at 00.45am they were met by a HSE ambulance crew who took the girl to University Hospital Cork.

Although it is a long-standing policy for anyone under the age of 16 – who is considered a child – to be accompanied by a parent or guardian, Kieran Cotter confirmed that it was ‘a first’ for Baltimore RNLI.

‘It would be very unusual for us to pick up someone underage that didn’t have a guardian with them, but, in this situation, the girl was attending one of the Irish colleges on Cape Clear.’

Kieran Cotter said there wasn’t any undue delay involved in the medical evacuation and that should it ever need to be carried out again he felt certain ‘everything will be put in place’.

‘It is my understanding that the same criteria that apply to the ambulance service apply to the lifeboat and, whatever the rules and regulations are, we will abide by them,’ he said.