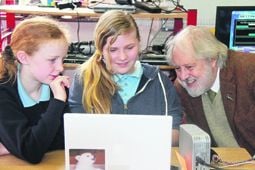 TO the delight of 29 movie-mad students at Cappabue National School, Lord David Puttnam gave generously of his time when he visited Kealkil last Friday to unveil their Digital School of Distinction Award.

Lord Puttnam, who is Ireland’s Digital Ambassador, took a genuine interest in the pupils’ and their digital projects, some of which were honoured with national and international film awards.

Student Jack Desmond, who hails from Whiddy Island, presented Lord Puttnam with a copy of Cappabue’s latest short film ‘Trasna na dTonnta’, which was filmed on location on Whiddy.